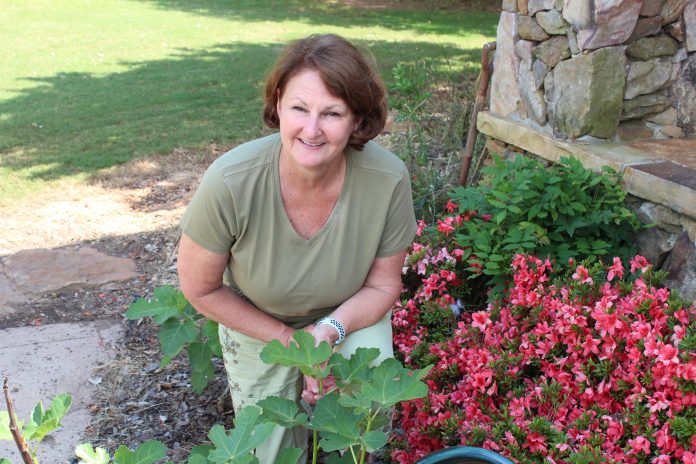 A narrow road winding through a barn leads to the home of Drs. Shirley and Allen Lazenby in an idyllic setting. As the car pulls up, their yellow Lab comes over to check out the new arrival. After a minute or two, she walks over to check out a tractor on the side.

The grounds are lovely with trees and plants. Off from the back porch, Shirley has planted small fig trees. Until just a few years ago Shirley had never eaten a fresh fig. When she tried one at the farmers’ market, she was smitten. It is now her favorite fruit, and she has been waiting for figs to ripen and be available at markets to prepare her favorite recipes with figs.

Shirley finds it difficult to believe that they moved to Opelika 25 years ago, which is the longest she has ever lived anywhere. When she was growing up, her father worked for Shell, and they moved every two to three years, living mostly in the mid-west.

Both of her parents had lived on farms on the East coast. “They always wanted to imprint us with agriculture,” says Shirley. “When we lived in California, they wanted us to join 4-H. My brother raised rabbits.”

Shirley is the oldest of four. While in 4-H, she entered her grandmother’s famous Blueberry Coffee Cake in the county fair and won. The scrumptious coffee cake is served with Lemon Daffodil Sauce.

Growing up, Shirley did not think about being a physician. Every time she moved to a different school district, she would pick up math and science quickly. Her father said if he could do it over he would have been a physician, which may have planted a seed.

When she arrived at Texas A&M University, Shirley knew she wanted to be a biochemist. “As time went on,” she says, “it looked like being a doctor would be a good choice. I did a summer research program at M.D. Anderson and discovered it was not what I thought it would be. I found that research generally led to more questions, not answers.”

About mid-way through college, Shirley decided she wanted to be a doctor. At the time it was great to be in Texas, as college and medical school was being partly funded by oil and gas revenue. She could attend medical school for $800 a semester.

Shirley met Allen in Houston. After a fellowship at M.D. Anderson, Allen returned to Emory to complete his residency. Then they moved to Opelika.

She found moving to the south was a huge culture shock. “Although I had moved around my entire life,” she says, “it is very different.”

They moved to property in back of his parents’ home where Allen grew up. His parents are Peggy Lazenby and the late Dr. William Lazenby.

Allen went to work at the Surgical Clinic at the Medical Arts Center where he is still on staff. Shirley was also on staff at the surgical clinic from 2004 to 2007. She had a solo practice while they were having children.

Even though Shirley worked, she was always busy with the children. “The kids are my world,” she says, “and it rocked my world when they were all gone. It is a big adjustment.”

Allison is a medical student at UAB, while Anna, who has traveled all over the world, will graduate with an architecture degree at the University of Texas. Kevin is a senior at Vanderbilt in biomedical engineering, studying to attend medical school.

Before attending college, Kevin won the Lee County Spelling Bee three times and advanced to the State Spelling Bee, which he won twice.

Since the kids were busy in sports, the Lazenbys became regulars at the parks and recreation department. When one of the board members retired, Shirley was appointed and then re-appointed.

“I have enjoyed being on the board,” she says, having an interest in bike trails. After research, she discovered that Opelika had passed a master bike plan in 2001, but it had been lost after 9/11.

She is working toward Opelika being a bicycle friendly community. Bikeology is the curriculum now available to fifth graders to teach them how to ride bikes.

“I am excited about the Creekline Trails Project that will develop biking, hiking and even wheelchair access along all of Opelika creeks over time,” she says. “I feel it is the right time.” She is on the task force.

When the children come back to visit, Shirley enjoys being in the kitchen with them preparing meals. After she discovered she adores figs, she began collecting fig recipes and planting fig trees.

She is sharing her favorite fig recipes along with a wonderful Tomato, Goat Cheese and Herb Pie that uses heirloom tomatoes and also her grandmother’s winning Blueberry Coffee Cake with Lemon Daffodil Sauce.

Shirley’s favorite play is Hamilton, and she especially enjoys the part where George Washington is singing a song with the Bible verse “everyone should sit under their own vine and fig tree.”

Hopefully, figs will be at the markets soon. Clip and save the recipes to be ready. (If you have a fig tree, maybe share a few with Shirley.)

Looking back on living in Opelika for 25 years, Shirley sees it as being like a fairy tale. “The kids have had every opportunity in the world at Opelika City Schools,” she says. “The climate is nice, and economic opportunity is huge. It has been great.”

Turkish Yogurt Cake with Figs
4 large eggs, separated
1/2 cup sugar
3 Tbsp. flour
1 1/2 cups full fat Greek yogurt
Grated zest plus juice of 1/2 lemon
1 1/2 tsp. orange blossom water
4-6 fresh figs, halved
Powdered sugar
Preheat the oven to 375F. Butter a 9-inch springform pan.
In a large bowl, beat the egg yolks with the sugar until creamy and light. Add the flour and mix until combined; then, stir in yogurt, lemon zest and juice and orange blossom water.
Beat egg whites in a clean glass bowl using an electric beater until stiff peaks form. Gently fold into batter until combined.
Pour batter into the prepared pan and arrange fig slices on top, face up.
Bake the cake for 50 minutes, or until the top is golden brown and springy (it’ll look a lot like a soufflé). The cake will rise a lot but will decrease when removed from the oven. Let it cool completely before dusting with powdered sugar, slicing and serving.

Raspberry and Fig Cake
Dry breadcrumbs (I use cornmeal)
1 1/2 cups sugar
3 eggs
1/2 cup butter, melted
Zest of 3 limes, divided
1 1/2 cups flour
Juice of 1 lime
1/2 pint raspberries
4 figs, cut into eighths (or additional 1/2 pint raspberries)
Powdered sugar
Preheat oven to 350. Butter a 9-inch springform pan and coat with breadcrumbs.
In a bowl, using a handheld mixer, beat the sugar and eggs at high speed. until fluffy, 2 minutes. Beat in butter and 2/3 of the zest. At low speed, alternately beat in flour and lime juice until almost incorporated. Using a rubber spatula, gently fold the batter until smooth.
Scrape the batter into prepared pan and smooth the surface. Gently press in raspberries and figs.
Bake the cake on the bottom third of oven for 40 minutes. Transfer to the upper third of oven and continue baking for 35 minutes longer until a cake tester instead in the center comes out clean with a few crumbs attached.
Transfer to a rack to cool. Run a thin knife around the edge and release the springform. Dust with powdered sugar. Sprinkle with remaining lime zest, slice and serve.

Fig Bran Muffins
One of my all-time favorite nurses, Kevin Smith, gave me a jar of fig preserves that he had made. At the time, I could not figure out what to do with it! Now I do! I blend it slightly in the food processor before using it as fig jam in this recipe.
2 cups wheat bran
1/2 cup yogurt
1 cup water
1/4 tsp. orange zest
1 Tbsp. honey
3 Tbsp. fig jam
1/2 cup light brown sugar, packed
1/2 cup vegetable oil
1 egg
1 egg white
1/2 cup flour
1/4 cup whole wheat flour
1 tsp. baking powder
1 tsp. baking soda
1/2 tsp. cinnamon
Pinch of nutmeg
3/4 tsp. salt
1/2 cup chopped pistachios
4-5 figs, quartered
Preheat oven to 350. Line 12 muffin tins with liners. Spread out the wheat bran on a parchment-line baking sheet; bake for 5-7 minutes until lightly toasted.
In a large bowl, mix together the toasted wheat bran, yogurt, water, orange zest, honey, fig jam and light brown sugar. Next, add oil, egg and egg white; mix until combined.
Sift dry ingredients into wet ingredients and throw in the chopped pistachios; mix until just combined, being sure not to over mix.
Spoon batter into muffin liners, filling them about 3/4 full. Top with one or a few slices of the quarter figs.
Transfer to the oven and bake for 25-30 minutes., until the muffins look and feel set. Allow to cool for 5 minutes in the muffin tins and then remove and cool on a cooling rack.

Fig-Bacon Bourbon Jam
1 lb. figs (fresh or dried), halved
1 lb. bacon, cut into 1 inch pieces
1 large onion, diced
2 garlic cloves, diced
1/2 cup brown sugar
1/2 cup bourbon
1/2 cup strong coffee
1/3 cup apple cider vinegar
1/4 cup maple syrup
1/2 tsp. ginger
1/2 tsp. cinnamon
1/4 tsp. salt
1/4 tsp. chili powder
If you are using dried figs, place in medium bowl and add bourbon, coffee, and 1/2 cup of water. Cover and let the figs soak for about 1 hour.
Heat a large heavy bottom pot over medium heat. Add chopped bacon and cook until bacon is done and slightly browned, but not crispy. Remove bacon from the pot and transfer it to a paper-towel lined plate.
Pour off some of the bacon grease, leaving about 1 Tbsp. in the pot. Add onion and garlic to the pot with reserved bacon grease and sauté until onions are starting to soften, about 5 minutes.
Add figs and all the remaining ingredients, including cooked bacon. Bring the mixture to a boil , then turn down heat to maintain a low simmer for about 45-60 minutes , stirring occasionally during this time. The jam is done when most of the liquid has evaporated and it has darkened in color.
Remove the pot from stove and allow the jam to cool slightly. Then transfer the jam to a food processor and pulse until desired consistency is reached. Transfer jam to airtight containers and store in the refrigerator.