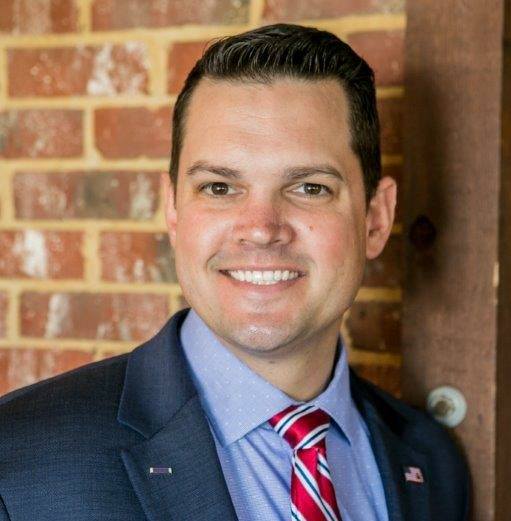 Opelika veteran and candidate for State Representative District 38, Todd Rauch, Auburn Veteran and Commander of the Military Order of the Purple Heart, Vann Daughtry and Military Order of the Purple Heart members from across the state of Alabama were on hand at the State Capitol today to join Governor Kay Ivey for the signing of House Bill 92 (HB92).
“It was an honor to be a part of this. I remember sitting in the gallery while our house members voted to pass this bill,” said Rauch, “and to be present to watch the Governor sign it into law was really special. There are many businesses in Alabama who show their support to wounded Veterans by adding designated parking spots for us, and this bill solidifies their use, but will hopefully also encourage more businesses and cities to do the same.”
HB92 was passed by the Alabama Legislature on Feb. 20. This bill provides for the issuance of a removable windshield placard to recipients of the Medal of Honor, Purple Heart Medal, the Army Distinguished Service Cross, the Navy Cross, the Air Force Cross, the Silver Star, the Bronze Star and those who are a duly recognized former prisoner of war. This bill makes it unlawful for a person to park a motor vehicle in any place of public accommodation that is designated for an individual who has received a specific military honor, or for an individual with a specific veteran status who does not have the corresponding distinctive license plate or removable windshield placard.
Veterans will be welcomed to submit an application to the Department of Veterans Affairs, which includes satisfactory proof, upon approval they will be issued a removeable windshield placard noting their honored veteran status. There is no fee for the removable windshield placard. The Department of Veterans Affairs will work with the Department of Revenue to prepare the placard. This bill is expected to go into effect on Aug. 1.
Todd Rauch is a Purple Heart Veteran of the United States Army, resides in Opelika and is currently a candidate for State Representative in District 38. He and Mr. Daughtry, along with many other Lee County Purple Heart Veterans, will be founding members of the future Lee County Military Order of the Purple Heart.