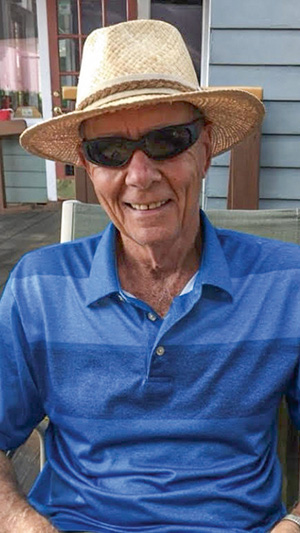 Dennis Lee Johnson, age 76, passed away on Sunday, Jan. 23, 2022, at The Harbors Senior Living of Fridley. Dennis was born on Jan. 21, 1946, in Amery to the late Winfred S. and Mildred E. (Polley) Johnson. He grew up in the Amery area and graduated from Amery High School. Dennis participated in several sports but soon discovered a passion for golf that remained with him throughout life. Dennis proudly served four years in the United States Airforce during Vietnam. Following an Honorable Discharge, he pursued a Business Degree at Eau Claire University, upon graduation, worked as an accountant for many years at Michelin Tires. His career provided an opportunity to relocate to Opelika, where he lived for 20 years enjoying golf year-round. He began experiencing health issues, and in the late 1990’s had a heart transplant. Following a successful procedure, he retired early from Michelin and began working at Robert Trent Jones Golf Trail in Auburn.

In 2001, Dennis met and married his wife Molly. They were active members in Trinity United Methodist Church of Opelika as well as volunteers in the Tiger Club of Auburn University. Together they enjoyed volunteering wherever needed, primarily football and basketball games, but also local golf tournaments.  In 2015, Dennis and Molly relocated to Clearwater, Florida, and continued golfing frequently but also gained a passion for hiking in the many beautiful State Parks. They moved to Minnesota Spring 2021 as Denny’s health was deteriorating; they lived in Long Lake before Dennis moved in to the Harbors Senior Living facility in the fall.

Dennis is survived by his loving wife, Molly; his children; Angela Johnson of Oshkosh, WI; and Shannon Siems (Cameron) of Knoxville, Tennessee; and step-children Alison Manz (Chad) of Harlan, Iowa; and Will Haase (Krista) of Long Lake; 12 grandchildren and four great grandchildren. Dennis also leaves behind two brothers: Gary (Gay) of New Richmond, Wisconsin; Steve (Gloria) of St. Croix Falls, Wisconsin; and a sister Jan Kosanke of Milwaukee; as well as many nieces and nephews and numerous friends. He was preceded in death by his parents; a brother-in-law Randy Kosanke of Milwaukee; and a daughter Jodi Lee Malarick of Clearwater Florida.

A celebration of Dennis’s Life will be held at a later date.  In lieu of flowers memorials are preferred to the Alzheimer Association. To sign an online guest book and view a video tribute, visit www.williamsonwhite.com. Arrangements were made with the Williamson-White Funeral Home and Cremation Services of Amery.