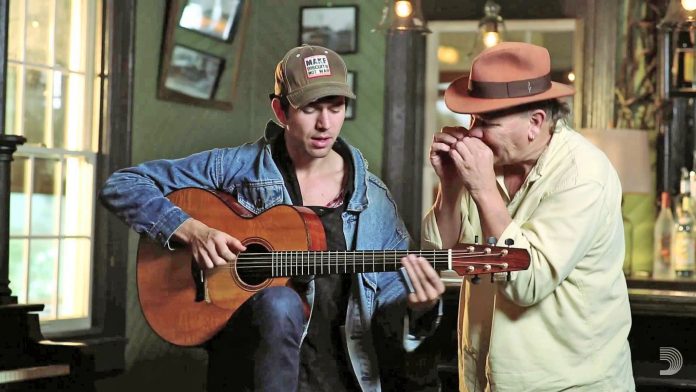 David Jacobs-Strain, along with accomplished harmonica virtuoso Bob Beach, will bring a touch of the blues to Sundilla Feb. 28.
Jacobs-Strain is a fierce slide guitar player and a song poet from Oregon. He is known for both his virtuosity and spirit of emotional abandon; his live show moves from humorous, subversive blues, to delicate balladry and then swings back to swampy rock and roll. It’s a range that ties Jacobs-Strain to his own generation and to guitar-slinger troubadours like Robert Johnson and Jackson Browne.
“I try to make art that you can dance to, but I love that darker place, where in my mind, Skip James, Nick Drake and maybe Elliot Smith blur together. I’m fascinated by the way that rural blues inscribes movement and transience,” Jacobs-Strain said. “The music that frees a singer keeps them on the run; there’s a crossroads where a thing can be enchanting but dangerous; damaging but beautiful.”
Jacobs-Strain began playing on street corners and at farmers markets as a teenager, and bought his first steel guitar with the quarters he saved up. Before he dropped out of Stanford to play full time, he had already appeared at festivals across the country, often billed as a blues prodigy, but he had to fight to avoid being a novelty act/
“I wanted to tell new stories, it just wasn’t enough to relive the feelings in other people’s music,” Jacobs-Strain said.
Jacobs-Strain has appeared at festivals from British Columbia to Australia, including Merlefest, Telluride Blues Festival, Philadelphia Folk Festival, Hardly Strictly, Bumbershoot and Blues to Bop in Switzerland. He has taught at Jorma Kaukonen’s Fur Peace Ranch, and at 15 years old was on the faculty at Centrum’s Blues and Heritage workshop. On the road, he has shared the stage with Lucinda Williams, Boz Scaggs (more than 60 shows), Etta James, The Doobie Brothers, George Thorogood, Robert Earle Keen, Todd Snider, Taj Mahal, Janis Ian, Tommy Emmanuel, Bob Weir, T-Bone Burnett and Del McCoury.
Showtime at the Auburn Unitarian Universalist Fellowship is set for 7:30 p.m. Advance tickets are $15 and can be purchased at Spicer’s Music, World Cup Coffee and online at sundillamusic.com. Admission at the door will be $20. Free coffee, tea, water and food will be available, and attendees are welcome to bring their own favorite food or beverage.The venue is located at 450 E. Thach Ave. in Auburn.