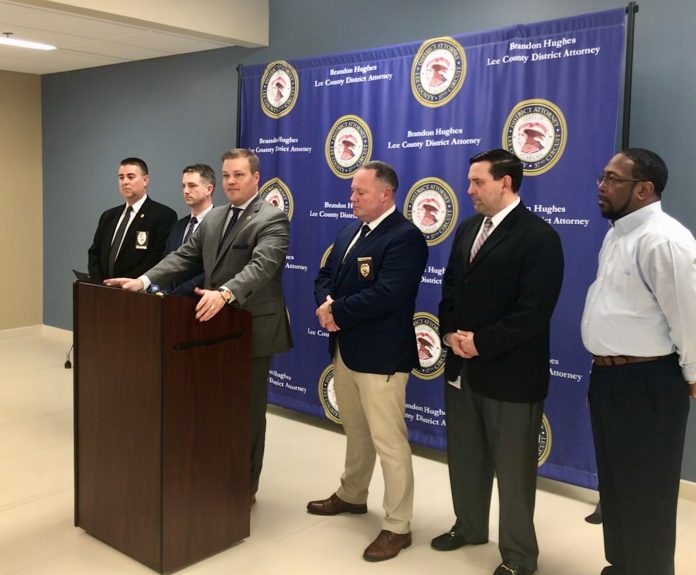 District Attorney Brandon Hughes announced the arrests of two individuals connected to the public assistance fraud investigation of four Opelika daycare centers during a press conference last Thursday at the Lee County Justice Center.
According to Hughes, sisters Cynthia Jones and Carolyn Wilkerson were taken into custody this morning, and are currently being held on a $2,500 bond.
Jones, operator of First Steps Learning Center, was arrested on 11 counts of public assistance fraud (a C-class felony) totaling $542,242.90 and one count of first-degree property theft.
Wilkerson, operator of New Horizon Learning Center, was arrested on 10 counts of public assistance fraud totaling $119,765.95 and one alleged count of first-degree property theft. Though they were related, Hughes said the sisters maintained the daycares as separate entities.
Accumulated evidence indicates that the cases of fraud date back to as early as 2014.
Monies were illegally obtained through fraudulent abuse a federal subsidized child-care program of the Alabama Department of Human Resources.
Through a credit-like card, program participants can use a card to swipe their child into daycare each day, which transfers payments from ADHR into that facility’s bank account. According to evidence unearthed by Hughes’s office, local DHR officials and Opelika Police Department detectives, the sisters claimed funding for 100 or more non-enrolled children during the last five years, many of whose parents were on waiting lists to join the program and seeking employment. Hughes said those parents will not face any punishment for the offenses committed by the sisters.
“(They’re) going to be on the hook for hundreds of thousands of dollars, nobody else (but) them. They’re the ones that stole it, they’re the ones that benefitted from it, they’re the ones that came up with this scheme and they’re the ones that are going to have to pay for this crime,” Hughes said.
The sisters could face a minimum of a year and day up to a maximum of 10 years in prison for each count of fraud on which they are convicted.
While the investigation continues, Hughes added that he expects the number of arrests and charges to increase. The overall impact and scope of this case is yet to be determined, but Hughes and AHDR Governmental Affairs Liaison Stan Landers said that the subsidy program and affected daycares should continue to operate as normal.
During the press conference, Hughes took a moment to express his gratitude to the individuals involved, particularly OPD detectives, for their swift pace toward action in this case.
“I cannot say enough about the job that the Opelika Police Department has done. They’re doing this in the face of other cases coming in … and to be able to concentrate and pull this off this investigation in this amount of time to render this number of warrants is (impressive),” Hughes said.
Toward the end of his address, Hughes issued a warning to other institutions in the county who may be involved in a similar situation.
“This is just one aspect of ways people commit public assistance fraud. Whether it’s EBT fraud, food assistance fraud … if there are businesses involved or individuals partaking in this in Lee County, it needs to end today because we’re coming,” Hughes said. “Now that know what we’re really looking for and that we got a blueprint for how these investigations go, it’s going to be a lot easier next time. I would advise (them) to stop, quit, because in Lee County, we’re going to handle our business.”
Those with information on this investigation are asked to contact Hughes’s office by calling 334-737-3446.