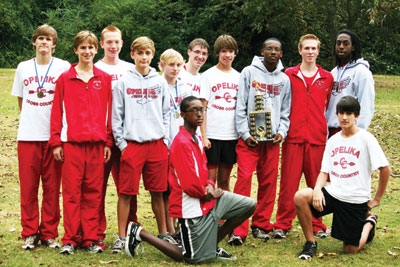 The girl’s race began at 1 p.m. and Emma Garner won the 6A girls race with a time of 19:50, thus qualifying her for the state cross-country meet next weekend in Moundville, Ala. at the Jesse Owens Memorial Park. The OHS girl’s team finished fourth, but only the top three teams qualify for the state meet. Adrianna Anthony a freshman at OHS also ran a great race qualifying for the state meet as an individual finishing in the top six runners not on a qualifying team. Tanishya Jones, Kelcie Carpenter and Anna Lazenby all had great races as well for the Bulldogs.

The boys’ race started immediately after the girls’ race, and Whitehead led from the start as he captured his third consecutive Section 2 championship with a time of 16:24. The OHS boys’ team finished in second place only 12 points behind team champion Smiths Station. James Ray Thrash, Kane Barrett, Shakiel Parker, Kevin Lazenby, Ben Bryant, Kyler Gillock, Logan Pridgen, Andrew Bartlett and Chazden Blackmon all ran great races to propel the Bulldogs into second place, qualifying the team for a place in the state cross-country meet next weekend at the Jesse Owens Memorial Park.

The state cross country meet will take place on Nov. 12, at the Jesse Owens Memorial Park in Moundville, Ala.