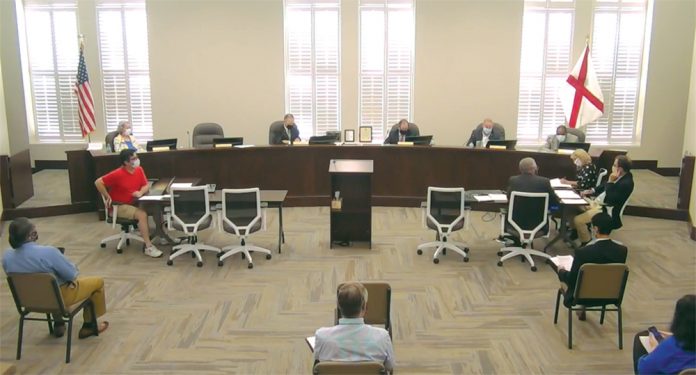 In an effort to increase and maintain employee retention, the Lee County Commission voted to grant Tier I benefits to Tier II employees and submit a plan in accordance with Act 2019-132 to raise rates as required in Act 2011-676.  “A benefit from this is, all of our employees, regardless of when they were hired, will be contributing the exact same amount of money toward the retirement system and will be receiving the exact same [retirement] benefits,” County Administrator Roger Rendleman explained.

Commissioner Robert Ham commented, “I just see where this does nothing but help [retain good employees.] I think it is one more step in keeping these good employees. We are just overrun with good employees in this county. We are so blessed with that… Roger, I applaud you for your efforts on doing this.”

– Jason Black – promoted to captain; Black has more than 25 years with the department

– Lee McLeroy – promoted to sergeant in the Court Security Division; he has six years with the sheriff’s office

– Pamela Revels – promoted to sergeant in the School Resource Division; Revel has served the sheriff’s office for nearly 16 years

• introduced and held the first reading of three vacancies on East Alabama Health Care Authority Board – Citizen interest forms from Bob Dumas, Dozier Smith T and Chris Nunn, have been received for possible reappointment for these vacancies.

• announced the upcoming vacancies on the following boards:

– four positions on the Lee County Cemetery Preservation Commission Board

– two positions on the Lee County Recreation Board and

– one position on the Horseshoe Bend Regional Library Board

• voted to approve polling place changes for the November 3 General Election; the changes are as follows:

– the Beat 8 polling place in Salem will be moved from Wacoochee Elementary School to the Board of Education’s ‘LC2’ building on Lee Road 145 across US Highway 280 from the road that the school is on. The LC2 building is next door to the old Salem school building.

• voted to approve County Attorney Stan Martin to serve as a defense attorney for Probate Judge and County Commission Chairman Bill English as needed. English announced that he has been added as a defendant to the federal election lawsuit previously discussed.

• nominated and voted to approve Commissioner Johnny Lawrence to attend the ACCA’s ONE Voice Session in Prattville on Aug. 20.

• voted to approve a digital information cooperative agreement with ALDOT – The agreement is a grant from ALDOT that supports the periodic orthographic photography project that the county conducts jointly with the cities of Auburn and Opelika. The most recent flyover of the county was conducted in January of the current year. In exchange for the funds provided in the grant, the county provides ALDOT access to the completed project and associated information.