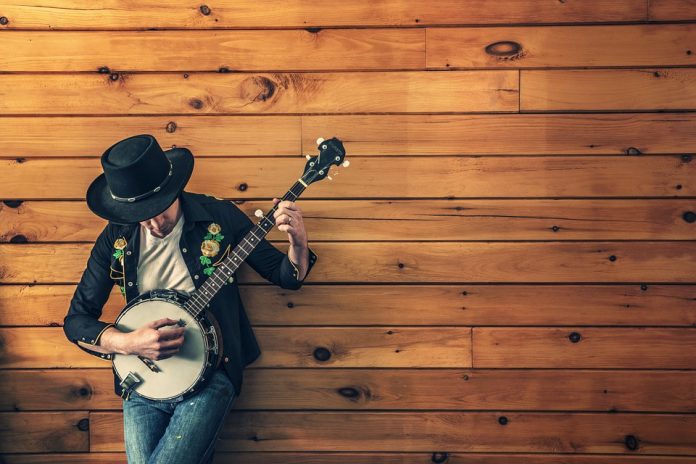 The band was all right. They played to a crowded joint of people who’d clocked out for the weekend. Folks who needed something greasy to eat and cold to drink.
Band members had gray hair, Western-style shirts, hats, boots. The whole nine yards.
“They’re here every Friday,” said the bartender. “Aren’t they awesome?”
The jury’s still out on “awesome.” But their hearts were in the right places.
“At least they play REAL country,” the bartender went on.
We can agree on that much. They played classics. And classic country is a dying art. You can’t look at a superstar who wears $1,400 boots and eyeliner and call him country.
The men on this stage looked like they knew how to operate nail guns.
A kid was bussing tables. He was early twenties. He set his tub beside me and watched the band.
I introduced myself.
He said he likes old-fashioned country music. His brother is the one who taught him to like antique songs about cheating hearts, boys named Sue, and wooden Indians.
He tells me he started listening to records a lot when he was diagnosed with cancer.
“That’s why I got this puffy face,” he explains. “All the pills I’ve taken make me like this.”
The chemo hasn’t helped either.
He was in the hospital for a month, once. He was fighting infection upon infection. His brother bought a portable record player. Together, they listened to classics.
Hank Williams, Bob Wills, Ernest Tubb, Merle Haggard. Music.
“I dunno,” he told me. “Those songs just make me feel good all over.”
In the hospital, he started taking guitar lessons from his brother. He liked guitar better than playing games on his phone, or watching daytime TV.
“Plus, I didn’t know if I was gonna die or not,” he added. “I was doing bucket-list stuff, I guess.”
I guess.
His parents bought him an electric guitar he could play through headphones. He practiced whenever he found energy. He also practiced whenever he didn’t have energy. He stayed up late, perfecting G-chords between bouts of nausea.
Doctors prepared his family for the worst. They said he might die in that bed. His infections were getting bad, and he kept developing new ones.
Pharmaceuticals were running through him by the gallon, the side effects were ruining him. His body was a living science project.
He remembers lying awake, heavily medicated, holding his mother’s hand. He remembers her tears making his gown wet.
“Please fight,” his mother told him. “Please don’t give up.”
“So I fought,” he said. “You know, you just tell your body, ‘Fight, man.’ Maybe you win, maybe you lose. But all you can do is fight.”
His cancer is in remission. One year.
He leads an almost normal life again. He even has a part-time job, bussing tables. But he gets tired quickly.
The band invited him onstage for a tune.
He borrowed a guitar. He concentrated on his fingers and gripped the neck. Before the song began, he spoke into a mic.
“Sorry,” he said. “I’m not a good musician, guys, I’m still learning.”
People cheered for him.
He sang. His voice was shaky. His fingers were unsteady. It was the most beautiful thing I’ve ever heard. The kid got a standing ovation.
His brother was in the audience. He clapped so hard he almost broke his wrist. “That’s my brother,” the young man told me, pointing to the kid onstage.
Yes sir, he certainly is.
And he’s mine too.
Sean Dietrich is a columnist, and novelist, known for his commentary on life in the American South. His work has appeared in Southern Living, the Tallahassee Democrat, Southern Magazine, Yellowhammer News, the Bitter Southerner, the Mobile Press Register and he has authored seven books.