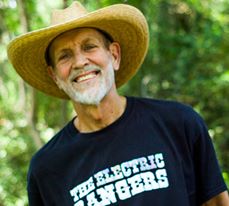 Cottonseed Studios is hosting a musical celebration of the life of local musician Roy Schultz Aug. 24 from 6 to 11 p.m. at The Railyard in downtown Opelika.
“Royfest” is free and open for the public to attend. There will be live music from an abundance of local musicians and food available for purchase. Donations will be accepted at the door to help pay participating musicians and workers at the event.
Schultz, an Auburn resident, passed away on May 10. Born and raised in St. Paul, Minnesota, he and his family relocated to California when he was 14 years old, the start of his musical career.
After years of cutting his teeth in the music business, Schultz was able to perform with a number of old-time country legends including Junior Brown, Little Jimmy Dickens, Freddie Fender and Loretta Lynn. Later, he moved to Honolulu where he started his own band called “The Electric Rangers” and eventually toured the world.
Later in life, Schultz, his wife Mary and son Jonas relocated to Auburn and began releasing albums under the name “Uncle Roy.” According to his obituary, he spent the last 20 years as a “staple of the Auburn music scene.”
Schultz played drums and guitar, sang and wrote many original songs. Though he enjoyed listening to and performing other genres, Schultz was “an inspiration to countless young musicians, and he made a major impact on country music along the way.”
In a Facebook event post, Cottonseed Studios’ owner Richard Patton wrote that the concert will feature “real old school country, blues, funk and r&b (as a way) to celebrate and pay homage to the legend that is UNCLE ROY!”
For more information or updates, follow the “Royfest” event page on Facebook. The venue is located between Mama Mocha’s Coffee Emporium and John Emerald Distillery along North Railroad Avenue.