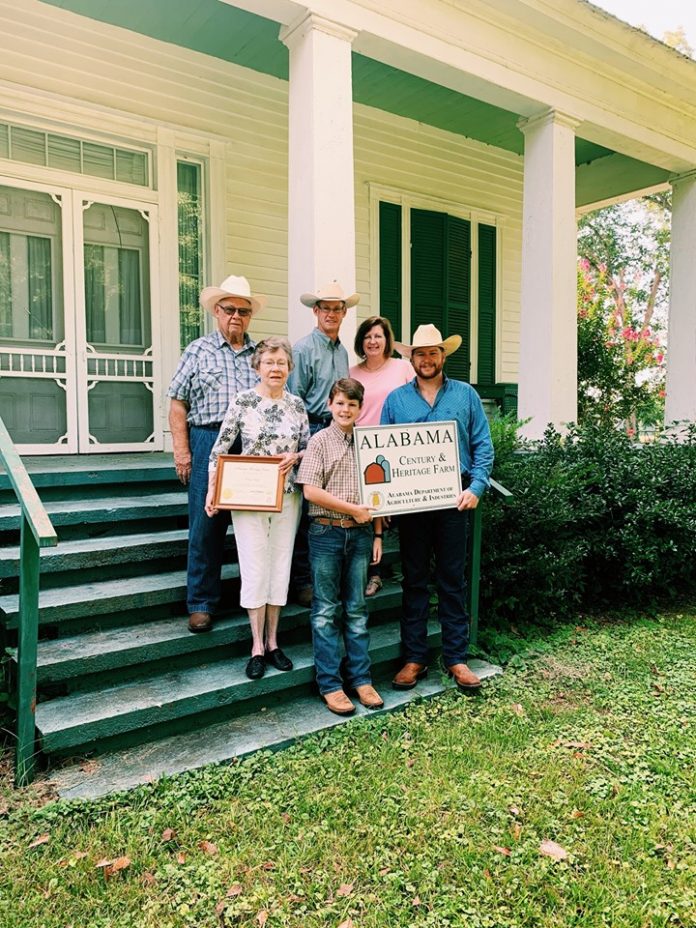 Collins Farms in Cusseta was recently designated as an Alabama Century and Heritage Farm by the Alabama Department of Agriculture and Industries.
According to the department’s website, farms eligible for these designations must have been in “the same family or operated continuously as a family farm for at least 100 years.” Other requirements include farms being more than 40 acres in size and owned by “applicant or nominee who must “reside in Alabama.”
The homeplace and land that Collins Farms occupies has a deep and extensive history.
In Ann Cipperly’s food column in the Oct. 3, 2017 issue of the Observer, she wrote that the “Lyle-Haralson-Collins house was built around 1840 in the Greek Revival style. A Creek Indian named Si-ar originally owned the land. Arnold Seale, after whom the community of Seale is named, bought the land from Si-ar’s heirs in 1836.”
Mr. and Mrs. James Collins Jr., owners of a dairy operation outside of Montgomery, purchased the house and land from the family of the late Dr. Tom Haralson, who passed away in 1944. The Collins’ transitioned their business from dairy to beef production, which is the heart of their business more than 75 years later.
Day-to-day operations of the farm are handled by descendants Jimmy and his son Jim Collins and their families. According to Jim, the farm “tries to specialize in all phases of production in beef industry.”
Their primary focus is on raising Angus bulls, bred heifers and steers that are marketed in truckload lots. Angus bulls are primarily sold three times a year at the Black and White Bull Sales in Arcadia, Florida and in Montgomery, bred heifers sold as replacement females to farms across the Southeast at their annual sale the end of April and steers to farms in the Midwest and High Plains. Additionally, they finish some cattle that are sold as freezer beef or through their restaurant La Cantina, which is located in downtown Opelika.
“In each of these segments of the beef industry, we try to do everything we can to make them have as much efficiency and value for us as well as for our customers,” Jim said.
With the farm poised to pass down to another generation, Jim said he and his father hope to pass along with it the principles and values that has helped it remain successful for seven and a half decades.
“We want it to be an enterprise that future generations can take pride in what they produce. Each successive generation has tried to add value,” Jim said. “Wherever the market or economy goes, we’re trying to set up the operation for the next generation to be successful and enjoy what they do.”
For more information about the Alabama Century and Heritage Program, visit testagi.alabama.gov/divisions/executive/media-communications/century-heritage-farm-program.
Collins Farms is located at 1100 County Road481. Read more about the farm on www.collinscattle.com.