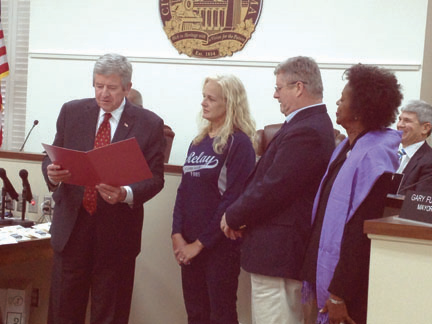 Photo by Alison James: Valeri White, Randy Causey (co-chairs of Relay For Life of Lee County) and Councilwoman Patsy Jones accept a proclamation by the mayor recognizing Relay for Life and announcing next week as “Paint the Town Purple.”

Tuesday’s city council meeting was the last for City Administrator John Seymour, whose term – ending at the end of April – was not renewed because of Seymour’s desire to retire.

“It’s been top-of-the-line to be here in Opelika,” said Seymour, who received a standing ovation from those assembled.

Seymour’s position won’t be left empty. Former councilman Joey Motley, who turned in his letter of resignation from the council Monday morning, was unanimously approved to step in the role and began work Wednesday.

The turnover makes necessary a special election, approved by the council to be held July 8, to fill Motley’s vacated council seat. Qualifying for the position will begin April 22.

The election will only concern citizens living in Ward 3.

The council tabled the demolition of four buildings on Jeter Avenue – SIRCO properties in similar deteriorating condition to the eight demolitions the city ordered in March.

“I’m trying to save our properties,” said Rosalyn Rosenblum, who once again appeared before the council on behalf of the properties. Rosenblum said a structural engineer/architect had recently been hired to assess the properties. “He’s putting together a prospectus for us. I’m requesting you table this until he has an opportunity to come in and speak with y’all … so we can have a plan to go forward. He can’t find anything structurally wrong with those buildings. They’re solid.”

The council voted to table the demolitions pending plans and a rehabilitation timeline from the engineer at the council’s first meeting in May.

“Our main objective is not to tear buildings down,” said city attorney Guy Gunter. “We would prefer to have them rehabilitated.”

Also at Tuesday’s meeting was the approval of a tax abatement for Pharmavite, which recently announced plans for $21.6 million of building additions and purchase of manufacturing equipment.

“We are so pleased that Pharmavite is expanding their Opelika operations,” said Mayor Gary Fuller, who sang the praises of the vitamins at the meeting. “This additional investment along with the opportunity for more jobs is good news for the citizens of Opelika.”

All expansion should be complete by the end of July 2015 and will mean about 50 new jobs for the area.

The council also approved several measures related to the city’s fiber network. Members approved a contract with Vubiquity, Inc., to provide Video on Demand and Pay Per View Content in the amount of $50,000 for the remainder of the budget year; an amendment to the sublicense agreement with Chattanooga Fiber company, resulting in a 50 percent discount toward the purchase price of caller ID and RDVR applications; and an amendment to the agreement with the electric power board of Chattanooga to extend the term three years and add a new Section 10 titled “consulting services.”

reappointed O.D. Alsobrook to the Opelika City School Board.

appointed Chris Nunn to a supernumerary position on the Board of Zoning Adjustments.

approved an ordinance amending the text of the zoning ordinance defining liquor and package store.

amended resolution No. 214-11 to increase the mayor’s authority to approve change orders to the ALCATEL-Lucent Contract for the Triple Play System.

approved the proposal for a new Solid Waste Management Plan.

held the recognition of a number of service awards and proclamations for Relay for Life and the National Day of Prayer.

approved a master plan proposal from Market + Main for the preservation and revitalization of in-town neighborhoods in proximity to the historic downtown area.