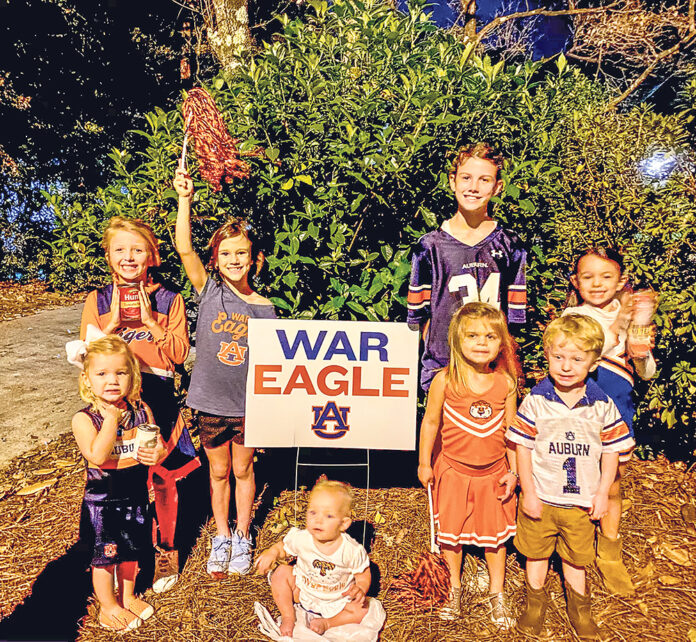 The ‘Beat Bama Food Drive’ is a fun way for college students and community members in Auburn to collect food for the Food Bank of East Alabama while also working against a rival college town — Tuscaloosa. Some parents, however, are also using the food drive as an opportunity to teach their children about serving others.

The drive began on Oct. 1 and officially ends on Thursday, when the two schools will see which community collected more for those in need.

Danielle Hayes said that she, along with other parents in her neighborhood (Southside in Auburn), wanted to involve their children in the process. The food bank had already dropped off bags, and collected them, in their neighborhood when the parents started thinking.

They decided they may as well help collect some more. There was also the idea that perhaps, if they raised enough, maybe their children could meet Aubie, Hayes said.

Back when quarantine began in Auburn, Aubie took some time to drive through a lot of neighborhoods and wave to children and families. However, he didn’t stop in Southside.

“We thought it would be really awesome if Aubie could be involved, because anything that Aubie does, the kids want to be a part of,” Hayes said.

The parents thought that if Aubie came and waved to the children who helped collect, it would encourage their children to want to participate, she said.

So the moms of the neighborhood had their children help create a flyer advertising that the food bank would drop off another bag at each house to fill with food. The children then placed a flyer in each mailbox so that people would know it was coming, and why.

“The kids, and us moms, we were trying to do something where we could be involved with Aubie, but also doing like a community service project to help the kids learn how to do service for others,” Hayes said.

The group invited Aubie to their neighborhood when the bags were all collected Sunday, but unfortunately he was busy with Aubie Claus photos that day.

Another guest visited the children, however: Santa Claus.

Santa and Mrs. Claus drove through the neighborhood, took pictures with the children and gave them letters from Aubie thanking them for their hard work, Hayes said.

“It’s just a fun way to get [the children] started with giving back,” Hayes said. “Our hope is that as they get older they take on stuff like this themselves and come up with ideas like this on how they can get plugged into the community.”

Hayes daughter, Merritt, who is seven years old, said she thought helping in the food drive would be fun.

“For the other people who don’t have food, you would give them food and you would make them happy,” she said.

Hayes said she thinks Aubie should encourage children every year to get involved with the ‘Beat Bama Food Drive.’

“He should, maybe next year, get the kids involved in their neighborhood drives and get them to knock on doors and give neighbors reminders to fill your bag with food,” she said.

Older children could do yard work in exchange for food or raise money to buy canned goods, Hayes said.

There are still ways to donate to the “Beat Bama Food Drive.” Visit the drive’s website for ways to donate monetarily or for a list of locations for drop-off items (http://www.beatbamafooddrive.com).