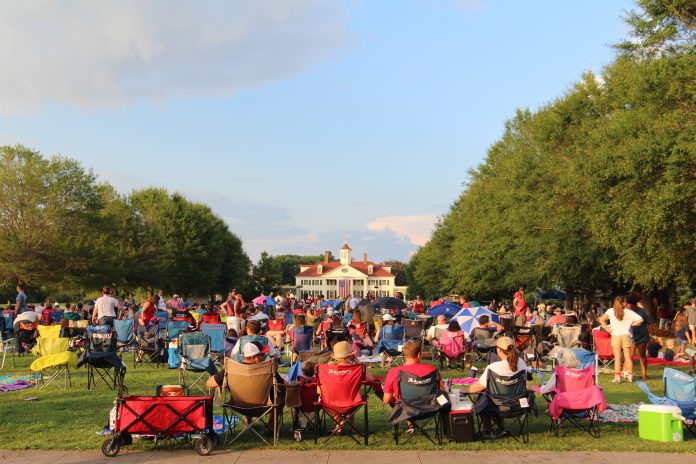 With fireworks lighting up the sky at twilight, celebrate the Fourth of July this year with a patriotic theme in a setting reminiscent of a 1776 village at the American Village in Montevallo. Amid a theme of red, white and blue, spend the day with family enjoying hands-on children’s activities, colonial games, patriotic music, Continental Army reenactments, salutes to veterans and activities with costumed historical interpreters.

Patriots dressed in period inspired attire will offer firsthand experiences. Throughout the Village look for Thomas Jefferson, Patrick Henry, Benjamin Franklin and Alexander Hamilton, among others.

Two of the crowd favorites are the Independence Day Ball, a celebration of dance, music and song; and the Battle at Concord Bridge, as the shot heard ‘round the world ignites a Revolution. Both will be performed twice during the day.

While there will be food vendors, pack a picnic to savor while enjoying the fireworks. A variety of easy to carry coolers make it easy to pack a picnic and keep the food cold until ready to enjoy.

If you can’t go on the Fourth, plan an outing during the month of July for their summer season signature program “Celebrate America,” which features “Pirates, Spies and Paul Revere’s Midnight Ride.” Step back in time and learn how colonial spies passed secret messages. Take part in the trial of Blackbeard’s pirates. Join Paul Revere on his midnight ride to warn the colonists that the British are coming.

The summer program runs Tuesday-Saturday (except July 3-5) from 10 a.m. until 5 p.m. until July 31. Start at the visitor’s center to find out each day’s revolutionary events. Admission is $5. Children ages 4 and under, veterans and active duty military are admitted free. Reservations are not required.

Opened to the public in 1999 with a focus on engaging and inspiring young people, the American Village offers a glimpse of history set in an authentically reproduced village. Historical interpreters in period dress relive important moments in a young country’s struggle for independence and liberty.

The American Village creation was the vision of Tom Walker, whose perseverance brought the living-history center to life on 188 acres in Shelby County. Walker envisioned students being able to “step into the scene” of history, making our country’s legacy real, personal and relevant. Each year, 30 to 40 thousand students from Alabama and nearby states visit the Village.

A full-scale replica of the White House Oval Office and the President’s desk are among the many aspects of this 18th Century inspired village. The Resolute desk is a reproduction of the one used by most Presidents since Rutherford Hayes.

Inspired by Mount Vernon, Washington Hall has a life-size statue of George Washington in the grand foyer. The Mount Vernon Room features a reproduction of Washington’s secretary desk.

Outdoor and indoor educational programs are held at the replica Colonial Courthouse of Williamsburg. The interior is transformed into the Mayflower for Thanksgiving programs, and students debate the resolves for independence as delegates to the Virginia Convention.

Patterned from the first President’s home, the James B. and Sylvia S. Braswell President’s House was the home of the Washingtons and Adams when the first capital was in Philadelphia. The interior is furnished to interpret the presidency of the 1790s. The original house no longer exists.

Many weddings are held every year at the Lucille Ryals Thompson Colonial Chapel, modeled after the Bruton Parish Church of Williamsburg. From a 100 year old pulpit, an interpreter representing Patrick Henry gives a stirring “Give me liberty or give me death” speech.

Completed in 2014, the National Veterans Shrine is patterned after Philadelphia’s Carpenters Hall. The Shrine honors veterans’ service and sacrifice for America. It features major sculpture and paintings by nationally-renowned artists, interactive media, artifacts and exhibits.

Housed within the Shrine is the Veterans Register of Honor, a website and database containing photographs, biographical sketches, and stories of America’s veterans and active members of the United States Armed Forces.

One leaves the American Village with a better understanding of how our country was formed. “We have almost a national amnesia of about the roots of our freedom,” says the founder. “When we have an understanding that freedom and liberty did not come cheaply, it increases our stewardship.”

The American Village will open Independence Day at 11 a.m. with activities starting at 11:30. Fireworks begin at 7 p.m. and end shortly after 9 p.m. Doors close for attending the fireworks at 6 p.m. Admission for the day is $5 per person. Veterans and active military, and children ages 4 and under, are admitted free.

The American Village is located at 3727 State 119, Montevallo. From Opelika, it will take about two hours. For a complete schedule of events for Independence Day, visit the American Village website: www.americanvillage.org or call 205.665.3535 for further information.

Picnic Essentials
Be sure to have enough cold inserts and bags of ice in the cooler to keep food cold. Don’t forget to take hand sanitizers, wet wipes, paper towels, trash bags, napkins, paper plates and utensils. You will also need sunscreen and insect repellent. Pack plenty of water bottles. Take a blanket or folding chairs for watching fireworks.

Snacks
Wash raw vegetables and cut into easy to eat pieces and place in plastic bags. Have plenty of snacks such as chex mix, graham crackers, fish shaped crackers and nuts in individual plastic bags to pass out to children. Take cookies that are easy to eat without any coating that could melt.
For adults, take strips of Swiss, cheddar cheese and other favorite cheeses, grapes and crackers. Homemade cheese wafers are also good.

Sandwich Bites
Our favorite snack to have handy for road trips is wrapped quarter sandwiches. Make sandwiches with whole wheat bread and almond butter or peanut butter. Cut into quarters. Wrap each quarter in plastic wrap and place in a plastic bag. These sandwiches don’t have to be chilled and are easy to eat.

Turkey or Ham Ranch Rolls
8-oz cream cheese, softened
1 Tbsp. ranch dressing mix
1 cup shredded cheddar cheese
1/2 lb. thinly sliced deli turkey or ham or combination
Four 12-inch burrito tortillas
Add ranch powder and cheddar cheese to cream cheese, mixing well. Spread about 2 Tbsp. mixture evenly on each tortilla. Place 3-4 slices of turkey breast flat on top of the cheese mixture to cover in a single layer.
Carefully roll tortilla up tightly to make sure it holds together and keeps its shape.
Refrigerate for about 30 minutes to firm up the softened cheese. Cut off ends of tortilla rolls and slice. Wrap each roll in plastic wrap and chill.

Mason Jar Vegetable Dips or Salads
Place dressing in bottom of mason jars. Top with fresh vegetables, such as carrot and celery sticks. For a salad, top dressing with bite sized pieces of lettuce, chopped tomatoes, chopped cucumber and other salad ingredients of choice. Place lids on jars and pack in coolers. When ready to serve salads, shake jars.