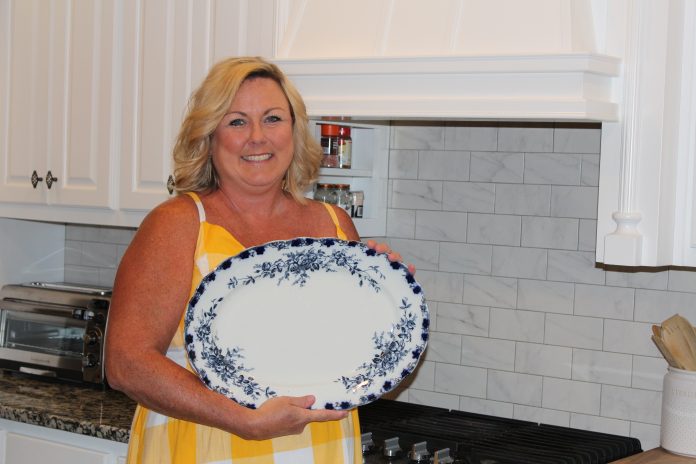 On Sunday afternoon March 3, Sandi and Robert Burroughs were planning on relaxing at home, watching movies with their daughter, Ellie. Suddenly, the alarms went off on their phones, warning of dangerous weather for the Lee Road 40 area. Sandi and Robert heard the roaring of the storm as they walked outside. Trees could be seen falling as the storm turned, the roaring getting louder, with darkness heading toward them.
In a rush, they grabbed their daughter with her puppy on the way to their bedroom closet, praying as they made their way. The storm hit quickly, shaking the house and taking the roof off, then pulling Robert out. As the house was being lifted and coming apart, Sandi was praying as all the clothes in the closet fell on her and Ellie, surrounding them. Suddenly, they were pulled away and thrown 260 feet.
Sandi pushed a wall off and removed a wall covering Ellie. They were covered in insulation, but miraculously alright except for cuts and bruises.
They looked for about ten minutes before they found Robert. He was unconscious and trapped under metal beams covered in glass. Their house and everything in it was gone, as well as the houses that had been around them.
When first responders arrived, Robert was taken to EAMC where he stayed in ICU for a week. He doesn’t remember being in the closet or the hospital.
While 10-year-old Ellie didn’t have serious injuries, the horrendous experience has left lingering effects. Ellie is in the fifth grade at Samford Elementary School. “They are prepared for these kids that went through all of this,” says Sandi. “We have been in touch with the counselors. The school system has been amazing to all of us. During the summer months they have continuously been in contact with us.”
After Robert was released from the hospital, the Burroughs stayed with his brother for about a week. They were then approached by Julie and Tim McGowin, who had purchased a house they were going to remodel to rent and offered it to them. They lived there for a month and started looking for a house, as they would have to start over.
They found a two year old house they liked and moved there in May. They have a new storm shelter.
Robert is the post commander at the Opelika State Troopers, while Sandi is a hair stylist at Two Chic Salon and Boutique in Auburn. She worked for several years at Pompeii in downtown Opelika.
Sandi was out of work for two weeks and then worked half days for another couple of weeks. Robert worked light duty in mid-April and started back full time in June.
Along with 10-year-old Ellie, they have another daughter and son. Ashley Martin, lives in Kingsland, Ga., with her husband, Bryce, who is the Navy. They have a son, Baylor, and are expecting a daughter. Son Dustin and his wife, Katie, live in Opelika.
As Sandi looked at the debris in the woods that was once their home, she was grateful her family was alive. She was sad for the loss of photos of their children. While everything was in pieces, someone found Sandi’s grandmother’s blue and white platter. It had survived the tornado.
While all the cookbooks were gone, a box of treasured recipes from Sandi’s mother and grandmother were discovered, but they are covered in insulation. Sandi will have to re-type the recipes, but she is thankful to have them.
Sandi grew up in the Anniston area where her grandmother owned a restaurant called Pete’s Barbecue, located outside the depot. She cooked barbecue and served a meat and three daily. On weekends, she offered catfish. Her mother was a good cook and helped her grandmother at the restaurant, but she was mostly a stay at home mom. Sandi’s older brothers worked in the restaurant.
She watched her mother cook and set the table. Holidays were special with her mother and grandmother both in the kitchen cooking big meals for the family.
Like her grandmother and mother, Sandi has a love for cooking and entertaining, but it has been slow getting back into normal routines. When entertaining, she prefers to have the food prepared ahead and arranges fresh flowers with hydrangeas being her favorite.
She has been finding new pans and serving dishes. She had a lot of dishes and pans from her mother and grandmother that she is missing. New white dishes look attractive on her new sideboard by the window.
They had just gotten a farmhouse dining table from Robert’s aunt’s estate before the storm. It was special to them because there was a bench on one side that was built for the children. They went to her house on Wednesday’s to do yard work for her. She would fill the table with food.
“My kids found the table,” says Sandi, “and it was in a million pieces. They picked up the pieces since they knew how special that table was to us.”
The dip recipes she is sharing are often requested by family and friends, as well as her chicken salad and pimento cheese. She also serves these at the lake and for watching football games.
Her father came up with the idea for the Philly Cheese Steak, which she put together. This is also a good recipe for football weekends.
Robert also enjoys cooking. He will grill meats, while she prepares the sides and desserts. Once in a while Robert enjoys being in the kitchen creating recipes. He created the Grilled Chicken Teriyaki Sandwiches that are popular with the family.
Sandi’s Crockpot Mac and Cheese is her son’s favorite. It is easy to assemble and cooks all day. Cooking favorite foods for the family that she has made over the years brings comfort and happy memories before the tornadoes, as well as creating new memories.

Sandi remembers the sound of the tornado roaring toward them was the scariest thing she had ever heard in her life. “We had become passive about the warnings and were not prepared,” she says.
After being misplaced for two months, they are glad to be settled in a new home. “The first morning in this house,” says Sandi, “we woke up and realized it was the first time we had slept through the night since the storm. We looked at each other, and said ‘we are home.’”
Sandi had a painting made with scripture to hang on the wall. It is a scripture that now means so much to her and Ellie.
It is a version of Psalm 91 verse 4, “He will cover you with His feathers, He will shelter you with His wings. His faithful promises are your amour and your protection.”

Robert’s Grilled Chicken Teriyaki Sandwiches
Thin slice boneless skinless chicken breasts
Thick cut bacon
Fresh sliced pineapple
Teriyaki marinade
Sliced provolone cheese
Whole wheat hamburger buns
Dukes mayonnaise
Marinate the chicken in the teriyaki, leaving some of the marinade aside.
Cook bacon slices and set aside.
Grill the chicken on your outdoor grill at 400 until done. Drain the pineapple and place each slice on the grill, brushing with the left over teriyaki marinade. Be sure to cook both sides of pineapple lightly.
You may also heat the inside part of the buns on the grill.
Now it’s time to put this all together!
Spread mayonnaise on the inside of the bun and add chicken, pineapple, bacon and cheese.
Enjoy!

Philly Cheese Steak
1 medium size beef roast
1 large bottle A1 sauce
1 onion
1 green bell pepper
Slice provolone cheese
Sub rolls
In slow cooker, add roast and cover with A1 sauce, cook until tender.
Remove from slow cooker and shred, adding A1 sauce to taste.
Cut up onion and pepper and cook on stove top in butter until tender.
Take a sub bun and cut open on the side; then stuff with meat peppers and onion mixture. Add 2 slices of cheese.
When all buns a filled, place on cookie sheet and heat in oven at 350 until cheese is melted.
Cut in half and serve.

Beef Enchiladas
1 lb. lean ground beef
1 cup chunky salsa
8 flour tortillas
8 oz. shredded for cheese Mexican blend cheese
10 oz. can red enchilada sauce
Preheat oven to 350 and lightly spray a 9 x 13 inch baking dish.
Cook ground beef over medium heat until done, drain and then add salsa.
Cook on medium heat until warm.
Pour half of enchilada sauce into bottom of baking dish.
Warm tortillas as directed on package.
Add about 1/4 of meat mixture to the tortilla and top with 1 heaping tsp. of cheese.
Tightly roll each tortilla and place in backing dish. Pour the remaining sauce and cheese over the top. Cover tightly with foil.
Bake for 30 to 35 minutes.
Serve with a side of sour cream.

Crockpot Mac and Cheese
3 cups uncooked elbow macaroni pasta
2 cups sharp cheddar cheese, shredded, divided
1 cup Colby cheese, shredded, divided
3 Tbsp. butter
2 & 3/4 cups half and half
15 oz. can cheddar cheese soup
1/2 tsp. black pepper
1/2 tsp. paprika
Combine the half and half with the cheddar cheese soup and mix until smooth.
Sprinkle the pepper and paprika on mixture and mix.
Pour the elbow macaroni and cheese into the crockpot, half of the shredded cheddar and Colby, the cut butter and half and half and cheddar soup mixture.
Mix until well incorporated.
Top off with the remaining shredded cheese.
Place lid on crockpot and let cook for 3 hours.
Serve and enjoy!

Breakfast Casserole
16 oz. container of biscuits
6 eggs
1/2 cup milk
1 1/2 cups shredded cheddar/jack cheese
2 cups cut up breakfast sausage
Salt and pepper to taste
Preheat oven to 350 degrees and spray 9 x 13 casserole dish with cooking spray.
Open a package of biscuits and cut each into 6 pieces.
Spread the cut biscuits into the bottom of the casserole dish.
Cook sausage according to package directions. Cut into bite-size pieces and spread over top of biscuits.
Sprinkle 1/2 cup shredded cheese over the sausage.
Beat the 6 eggs with milk and pour over the sausage and biscuits.
Sprinkle the remaining cheese on top and add salt and pepper.
Bake at 350 degrees for 30-35 minutes until eggs are set.
Let cool 5 minutes.

Old Fashioned Pound Cake
2 sticks unsalted butter, room temperature
1/2 cup shortening
5 eggs
3 cups granulated sugar
3 cups all-purpose flour
1/2 tsp. baking powder
1/2 tsp. salt
1 cup milk
1 tsp. vanilla
In mixing bowl add softened butter and 1/2 cup of shortening; mix well.
Start adding 3 cups sugar just a little at a time while still mixing.
Then add the eggs one at a time, mixing as you go.
In a separate bowl, add flour, salt and baking powder. Mix well.
Start adding mixture to the batter a little at a time, alternating with the milk and begin mixing as you go.
Preheat oven to 350 degrees.
When cake is well mixed pour into a greased and floured Bundt pan.
Bake for 1 hour and 10 minutes, or until toothpick comes out clean.
After cake is cooled, flip it onto your favorite cake plate.