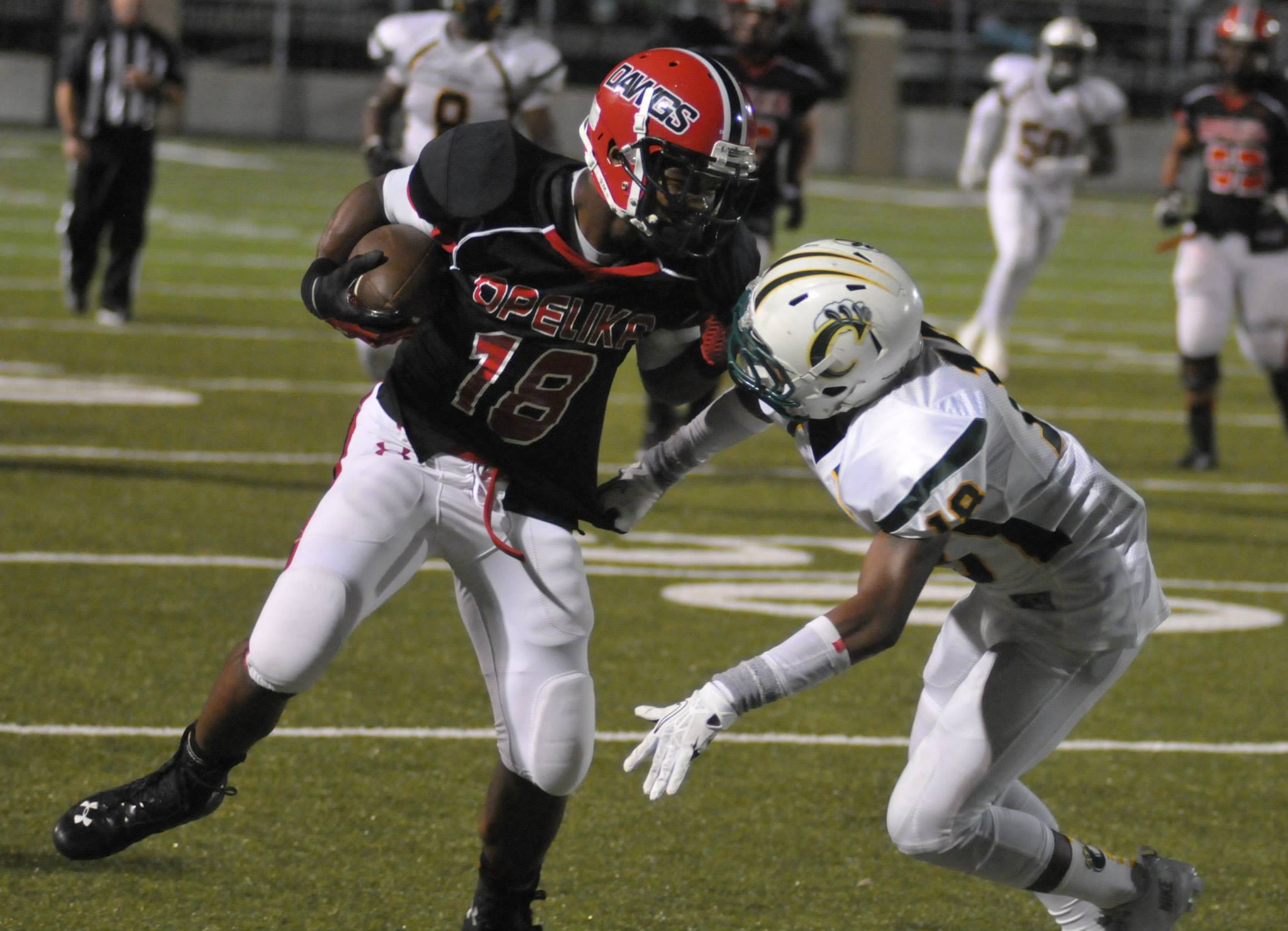 Opelika High football players have the week off to rest before practice starts Monday. The Dawgs will report Monday afternoon to officially start practice for the upcoming season.

Coach Blackmon and his staff will have 14 days to prepare the team for Carver on August 22 in the  “Champions Challenge” at Montgomery’s Crampton Bowl.

This will not count as a win or loss.

If both teams agree, the game will count in the record. Coach Gresham, Carver Head Coach, decided not to count the game in the records.

Football fans will not notice the game doesn’t count – at least not by looking at performance on the field. Carver is known for playing great football over the past seven years. The Wolverines have made the playoffs seven consecutive seasons, advancing to the quarterfinals and semifinals during this time.

The Opelika/Carver game has become a battle of 6A schools. This year’s game should be a good one.

Both teams have hopes of competing for the 6A State Title.

BREAK DOWN OF OHS FOOTBALL SCHEDULE

As you know the AHSAA added another classification, 7A. Opelika remained 6A, but most of our rivals moved up to 7A (Auburn, Smiths Station and Central).

*The Bulldogs will “officially” start the season against rival Auburn at Duck Samford Aug. 29. This will be the earliest the two crosstown rivals have played.

Opelika may have a small advantage despite playing on the road. Coach Tim Carter’s teams get better as the season progresses. Playing the Tigers early will help us due to all the new players.

Opelika is 1-5 in the last six games against AHS. Look for the Dawgs to be ready for the Tigers!

*Sept. 5  – Opelika will travel to Alex City to play Benjamin Russell. This will be the third road game in a row. The Wildcats lost four-year starting quarterback Bryant Horn. Horn is the son of head Coach Danny Horn. BRHS and OHS split the last 2 games. This years game is more important because its a Region game. This is a huge game for us. Its the first Region game after playing rival Auburn.

*Sept. 12 – Home opener against Region foe Pell City. This will be the first game against Pell City. We don’t know much about Pell City.

*Sept. 19 – at Oxford. This will be the fourth rode game in five weeks. This is a Region game that could decide the Region Championship. Oxford has a solid program and could turn into a Rival in the new Region.

*Sept. 26 – Central at Bulldog Stadium. The Bulldogs will return home for familiar rival Central. The Red Devils are 7A but the game is just as important as a Region game. Central hired former Prattville, Florence and Charles Henderson head Coach Jamey DuBose. DuBose was an assistant at OHS under Spence McCracken. Look for the Red Devils to be young but talented. I hope it takes a few years for CHS to adjust to the new coaches.

*Oct. 3 – Chelsea come to Bulldog Stadium for Homecoming and a Region game. This will be the first game between the two schools.

* Oct. 10 – Valley in Fairfax. The Rams move up to 6A and are now a Region foe. Opelika fans know about Valley High. This was a huge rival game 15 years ago. Opelika and Valley stopped playing each other in the late ’90’s.

*Oct. 17 – Chilton Co-Region game in Clanton. This will be another new Region opponent for OHS. This will be the first time these two schools have played.

*Oct. 31-Enterprise-Opelika will end the regular season with a trip to the wiregrass to play the Wildcats. Enterprise will be the third 7A school on our schedule. This will be a tough game because the playoffs strart the next week. Opelika has won several game in a row against Enterprise.

As you can tell, OHS will play several schools we have never played before. The new classifications caused the changes.

Opelika should compete for the Region Championship. This is a prediction and should not be taken the wrong way. I believe in our program!

The Cheer team won the most prestigious awards, “The Tradition Award.”

The mascots, “OPE and “LIKA,” received Spirit sticks and Superior Ratings every night. They won the Tradition award, All American honors and overall camp Champions.

The squad won the “Most Spirit Award.”

CONGRATULATIONS to these young ladies!

OCS Superintendent Dr. Mark D. Neighbors announced Opelika has agreed to live stream game starting this season. The live stream can be purchased by the day, month, six-months or year. A portion of the fees the customer pays to see the game will go to Opelika City Schools.

You will be able to watch the game and listen to the Opelika Radio Crew broadcast the game at the same time.

The system plans to use students to produce the video. There are plans to offer a class for students that are interested in this field.

Dr. Neighbors hopes to stream at least one game, match or contest for each sport. The system will be able to screen other activities on campus.

The Opelika All-Sports Booster Club will host the annual Corporate Sponsor Appreciation dinner, Thursday, Aug. 14 at 6:30 p.m. The dinner will be catered by “Kitchen 3810” in the new cafeteria at OHS. Coach Blackmon will speak about the upcoming athletic year and new classifications.

Corporate Sponsors should receive an invitation soon. They were mailed Wednesday.

The three loved Opelika, and each left a mark on the this great city!

Mrs. Chapman was one of the sweetest, friendliest and most outgoing ladies you could ever know. Mr Rhodes was a regular at Bulldog Stadium. He loved to watch football and supported Opelika athletics. Mr. “Henry” Stern was a lifelong friend. His son Jay and I graduated at OHS in 1982. Mr. Henry, as I called him, was a history book.

I want to personally send my deepest sympathies to the families of these three great people!