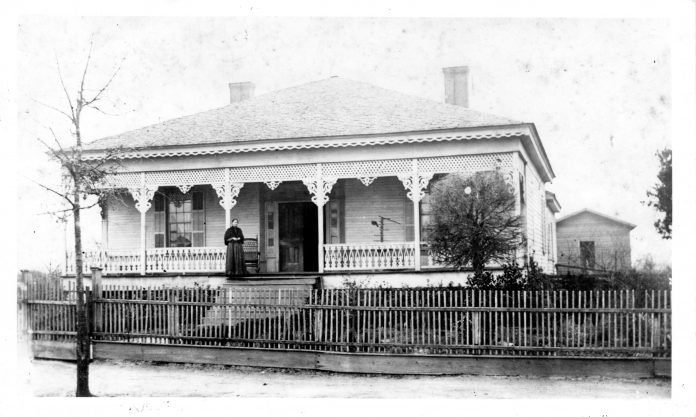 During Reconstruction days following the Civil War, young W.O. Brownfield watched Yankee soldiers stationed in Opelika drill on a field near his home on Russell Street, now known as South Tenth Street. One day after a heavy rain, the streets downtown were wet and deep in mud. As W.O. stood on the plank sidewalks looking across the street, one of the Yankee soldiers walked through the mud, picked him up and carried him across the street, much to his surprise.
The son of Dr. Robert Styles and Rebecca Brownfield, W.O. grew up in a gingerbread-trimmed house on South Tenth Street built by his parents before the Civil War between the mid- to-late 1850s.
Most of the hustle and bustle of Opelika during this time was on the south side of town where early settlers built their homes and prospered.
Dr. Robert Brownfield graduated at the Medical College of South Carolina. He came to Opelika around 1850 and married Rebecca Eleanor Watson in 1853. Rebecca moved to Opelika when she was 7 years old. Her father David Watson operated one of the first mercantile stores in a wooden building on North Railroad Avenue.
Dr. Brownfield traveled throughout Opelika on horseback and horse and buggy. During hard times, he took whatever was offered for his medical services. When he could no longer support his family, he stopped practicing medicine and went into the mercantile business with Jacob Watson, Rebecca’s brother.
After W.O. grew up, he became Circuit Clerk in 1907. The house remained in the Brownfield family for more than a century.
In spring 1986, the Brownfield House began a new life when the Opelika Historic Preservation Society (OHPS) moved it to North Eighth Street. Raymond Newman donated the house to the OHPS.
The Opelika City School Board agreed to lease the property at the corner of 7th Avenue and 8th Street. The house was in need of restoration with holes in the floor and walls. After several fundraisers, work on the house began a few years later.
Peter Weiss, a professor at Auburn University, was president of the OHPS during restoration. With Weiss volunteering as contractor, the OHPS hired students in building science at Auburn. One student with excellent carpentry skills created fine workmanship in the molding and mantels and also built the kitchen cabinets.
The dogtrot house with four rooms on either side was extended in the back to allow for a kitchen and restrooms. The center wall on one side separating bedrooms was removed to create a spacious meeting room.
Decorative lattice screens on the veranda with delicate gingerbread and carved balusters form the appearance of a historic façade.
Handicap ramps were added on back. At the base of the back porch, a fountain is the focus of a small patio.
It took two years to restore the antebellum house. Like other older structures in the South, the restored Brownfield house vividly brings back images of the past.
The house is considered a perfect example of the transition from Neo Classical to Gothic Revival architecture.
Antiques were donated to furnish the house, many from society members. William Eppes of New York gave numerous furnishings from his family home in Goodwater. The dining room table, sideboard and buffet came from the W.C. Davis house, which is the Heritage House. Other furnishings were donated by C.C. Torbert Jr., Jacob Walker, T.K. Davis and Duke Searcy.
The chandelier in the meeting room was in the old Saugahatchee Country Club, while the one in the dining room was from Barbara Patton’s father’s house.
Located on the site of Cliff High School, the Brownfield house fits nicely into the Historic District and offers an elegant setting for receptions and parties.

Plant It, They Will Come