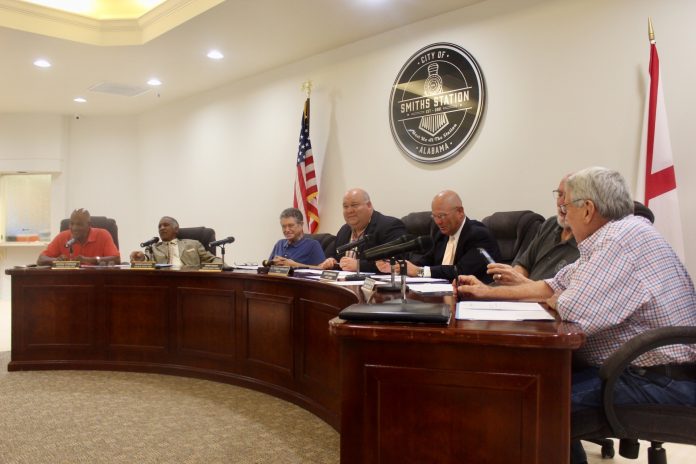 Smiths Station’s Chief Financial Officer Shelby Branton presented a positive report of the city’s economic status during last Tuesday’s city council meeting.
According to Branton, the city’s revenue has “superseded” projections from this year’s fiscal budget, and that trend is expected to continue until the start of the 2019-2020 fiscal year which begins Oct. 1. She added that the city “has not been or operated in the red” during the entire 2018-2019 fiscal year.
“I believe you can chalk this up to us having a sound budget. Being that we are a rapidly growing and maturing city, we know that there are opportunities for us to tap into that and that’s something that is factored into the planning of our budget each year,” said Mayor F.L. “Bubba” Copeland. “I’m very proud of these numbers and we hope to keep this momentum going as we move into the next fiscal year.”
The council approved the re-zoning of 1.2 acres of property owned by Smiths Station resident Michael “Roy” Sparks located on the northern end of Lee Road 430 from C-1 commercial to R-3 single family, as well as annexation request from Taylor Hartley, who owns property in the Copperfield Subdivision that is congruous to the city limits.
Before the meeting was dismissed, Copeland issued reminders to the five councilmen on pending election paperwork deadlines and several coming city events, including Terry Grocery’s 50th anniversary celebration on Sept. 7 and homecoming week Sept. 16 to 20. On Sept. 20, a Friday, a large portion of Lee Road 430 will be blocked off for the homecoming parade in advance of Smiths Station High School’s gridiron contest v. Robert E. Lee (Montgomery) High School at 7 p.m.
In other business, the council: