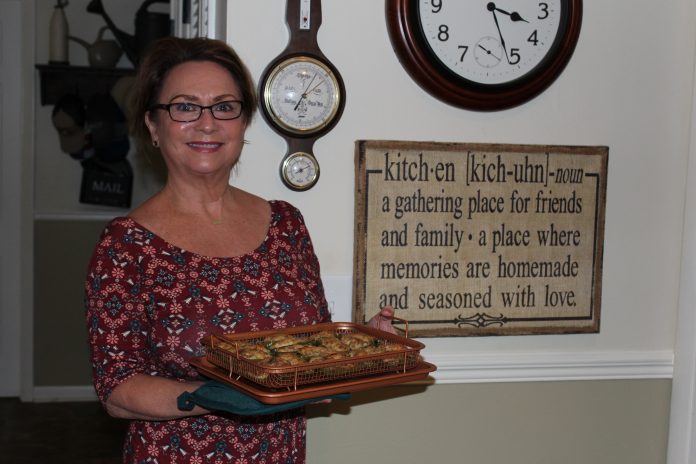 When Brenda and Bob Boteler decided to move to Opelika, they were looking for a friendly neighborhood. After talking to various folks, they found the perfect place for them with all the elements they desired, as well as being a great neighborhood. Brenda enjoys cooking healthy dishes in the spacious kitchen and sharing with neighbors.
I was interested in meeting the Botelers for several reasons. One was that they live in our former house on West Collinwood Circle where we lived for over 14 years, raising our children. Brenda and Bob were smitten with the house for the same reason we were with the large screened back porch, overlooking a stunning wooded view and a creek.
The house has been updated with hardwood floors throughout, granite countertops and new appliances. I have wonderful memories of preparing meals for my family in the large kitchen.
Now, Brenda is enjoying cooking in the updated kitchen. When I arrived, she was baking Jalapeño Poppers in the oven that filled the house with a savory aroma of sausage and spices.
While Brenda grew up in Montgomery, she spent her summers with her grandmother Royall in Elkin, N.C., which was her father’s home. Her grandmother taught her to cook on a wood burning cast iron stove. Brenda enjoyed watching her grandmother put her apron on and pin her hair back as she prepared to cook.
Her grandmother’s entire backyard was a garden with apple trees in the middle. Together they canned vegetables and made applesauce and apple jelly. Brenda also milked the cow and churned milk to make butter.
After attending Auburn University and finishing her education in Lexington, KY, Brenda worked in bank mergers and acquisitions for several years, as well as consulting in Washington, D.C. and New York.
“Then, I decided I wanted to be a cowgirl,” she says. “I wanted to get back to things I love, including a farm, gardening and cows.”
Her sons, Grif and Tom, were in junior and senior high school when she purchased land in Kentucky. She owned and operated a registered cattle and quarter horse farm.
She had a one-acre vegetable garden. One year she canned over 200 quarts of green beans. She was able to share with neighbors who did not have a garden. “It was a beautiful, peaceful chapter in my life,” she says.
Brenda felt she needed to work more before retiring. She went to work at Toyota Motor Manufacturing in Georgetown, KY, as team leader for V-6 Powertrain engine build and test for Camry and Avalon.
After she finally retired, Brenda moved to Florida and lived on the water. When her aging parents became ill, she felt she needed to move to this area to help care for them. Her sister already resided in Opelika.
Since then, her father has since passed away, and her mother is in an assisted living.
Five years ago, Brenda met Bob, who is from Jackson, MS, and has a background in law enforcement and investigation. Since they married, the Botelers have enjoyed traveling in their RV with their dog, Molly. Along with exploring interesting places, they enjoy visiting Brenda’s grown sons and grandchildren. Grif lives in Montana, while Tom resides in Birmingham.
Brenda has an interest in antiques and has collected pieces from places she has lived and traveled.
The Collinwood neighborhood reminds her of the close community where she grew up. “When we walk Molly,” she says, “we meet a lot of people. It melts my heart that people are so kind, generous and helpful.”
Brenda will share meals with a neighbor who doesn’t cook much anymore. They are also alert to the well-being of their neighbors.
They enjoy being a part of the annual Luminaries during the Christmas season.
After taking medical classes on nutrition, Brenda began creating recipes and adapting others to be healthier. Her suggestions for eating healthy include buying fresh and local, using the best olive oil and not overcooking vegetables. For the most part, she has eliminated “white” from her menus.
Every day she drinks distilled water with lemon, as she feels it is one of the best things she can do to remove free radicals.
She mainly eats foods that are alkalizing, which helps to heal the body in an alkalized state. These foods include lots of fruits and vegetables.
“I like to cook,” she says, “because it reminds me of my Grandmother Royall.” Once in a while she bakes special treats, including Old Time Buttermilk Pie and Blueberry and Lemon Bread.
Her Chocolate Cups are easy to make and great for filling with ice cream, cheesecake or fruit. She freezes ice cubes with popsicle sticks and dips them into melted chocolate to form a cup. It is then placed on wax paper for the chocolate to set. The filled cups are an attractive dessert.
“I love cooking for my husband, neighbors and family,” says Brenda. “The retirement phase of a life is a beautiful thing when you have neighbors like we have and a home with a view and wildlife. It is great living in Opelika.”

Ice Cube Chocolate Cups
Freeze a tray of ice cubes with a popsicle stick in each.
Melt 16 oz. pkg. chocolate morsels, semi-sweet or dark.
Lift out each ice cube and dip in melted chocolate to coat 4 sides not the top.
Place on wax paper and remove ice cube and stick, leaving square chocolate cups.
Fill with cheesecake filling topped with a strawberry, ice cream or graham cracker crumbs and marshmallow cream.