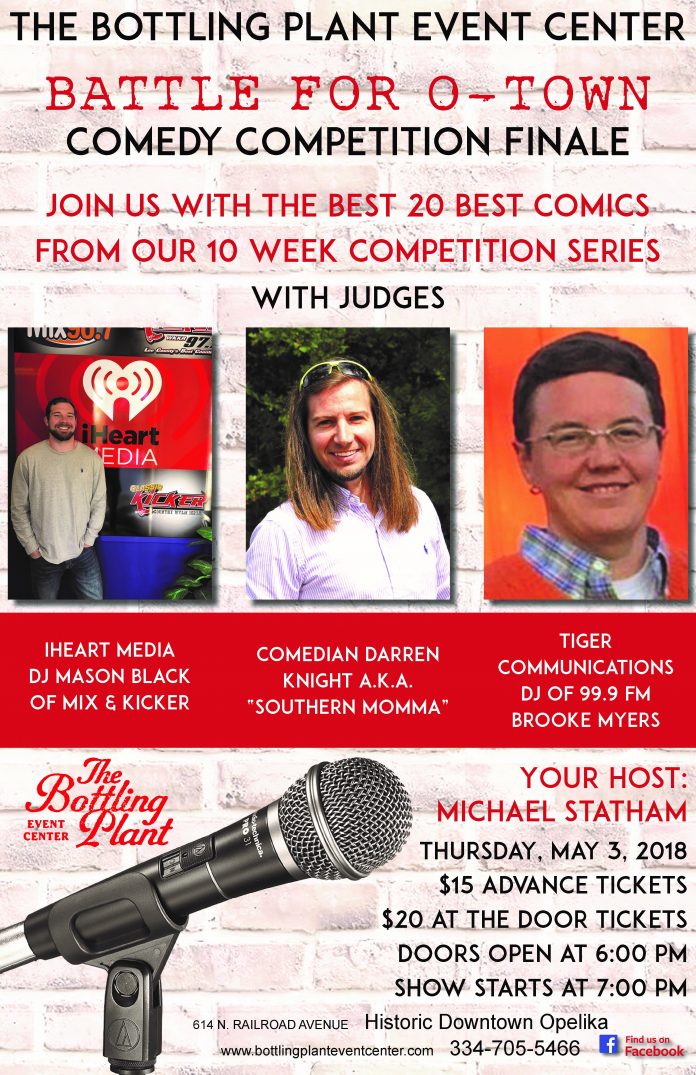 The question of who will become Opelika’s funniest stand-up comic will be answered during the “Battle for O-Town Comedy Competition” finale May 3 at the Bottling Plant Event Center.
Hosted by Opelika native and rising comedic star Michael Statham, the event will feature the 20 remaining contestants from the 10-weeklong competition. They will duke it out for the title in front of an all-star studded judging panel, which includes local deejays Mason Black and Brooke Myers and Darren Knight, a Facebook sensation who holds the title of “the fastest rising comedian in American history.”
“(Since Darren was confirmed), I’ve been having people come up to me and say, ‘wow, you have somebody big coming over there.’ That’s the sort of feedback I’m hearing from the community about this finale,” said BPEC Owner Lisa Ditchkoff.
Following is a current list of the remaining competitors, subject to change until the day of the event:
Gabe Davis is from Columbus, Georgia, and is making a name for himself in the Atlanta comedic scene.
Ari Kobler is from Huntsville, where she started performing three years ago. She has been featured on Epic Comedy Hour and the Star Bar.
James Etchison is from Smiths Station. He has been described by the Columbus Ledger-Enquirer as “The Master of the One-Liner.”
R.J. Marchand is the host of the longest-running comedy show in Tuscaloosa at the Druid City Brewing Company. In his short comedy career, he has already performed at comedy venues in Alabama, Mississippi and Georgia.
Lamar Pullom is from Tuscaloosa. He has performed at venues like the Stardome Comedy Club for the last three years.
Eugene Henry Jr. is from Birmingham. He has performed all over the Southeast from Atlanta to New Orleans.
Austen Hickerson is from Birmingham. He has been a regular performer at the Stardome Comedy Club since winning their comedy competition.
Zach Travis is from Tuscaloosa. He is a member of Tuscaloosa Comedy and hosts the web series “What’s Happening Alabama.”
Beth Bloomfield is from Hoover. She has a non-Southerner’s fresh take on moving to the South.
Detroit Reid, originally from Detroit, is now living in Birmingham. He has opened up for Mike Epps, Michael Blackston and Lavell Crawford.
Matt Leach lives in Opelika. He has prior comedic experience while living in Atlanta.
James Kimbrough is from Auburn. James competed with Statham last January at the Comedy Competition Finale at the Stardome Comedy Club.
Brandon Kennedy is from Montgomery. He has been performing at the Capital City Comedy Scene for the last three years.
Nicole Sanders from Auburn.
Nick Morgan Moore from Montgomery.
D’Anthony Turner from Montgomery.
Kurt Keller from Montgomery.
Comedian Hollywood from Birmingham.
Gant Moore from Huntsville.
Lavell Galloway, Ernie Kennemar and J. Smiles will be unable to perform at the finale. Alternate names will be drawn after tonight’s show.
Tickets are $15 in advance and $20 at the door. Doors open at 6 p.m., and food will be served until the show begins at 7 p.m. For more information or other ticketing options, visit www.bottlingplanteventcenter.com. The venue is located at 614 N. Railroad Ave.