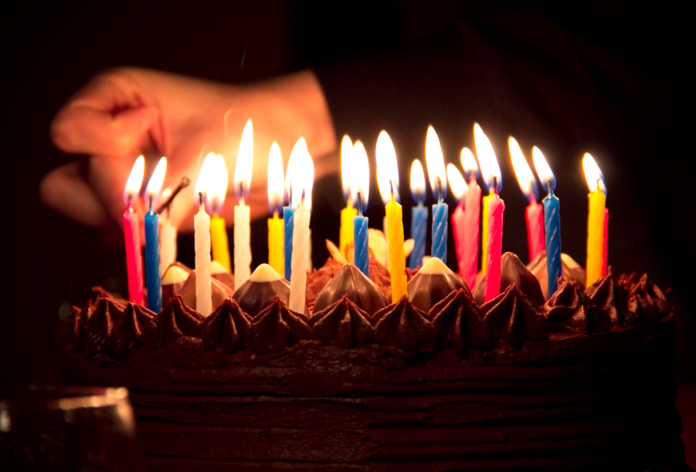 Last Sunday, we celebrated my birthday. I won’t tell you exactly how old I am, but let’s just say I’m half way to 90. You weren’t planning on using your math skills when you started reading this, were you? It was a great day, complete with a houseful of ladies, homemade chicken casserole, and cake.
I got two new pairs of jeans, two new polos, and a Jaws t-shirt to go along with them. The last time I had two new pairs of jeans, President Bush the elder was in office. You think I’m kidding. Ever since I got the Jaws shirt, I’ve been hearing the Jaws music in my head.
I seldom had birthday parties growing up, and by “seldom” I think I had one. It’s not a big deal. That’s just the way it was. Mama always got me a cake and present and that was perfect. Now, I’ve had a little birthday celebration three of the last four years, and I kind of like it. I really don’t care anything about the gifts—although I won’t turn them down—I just like being around some of the people I love. Whew! That was cheesy, yet true, nonetheless.
This past Sunday, we celebrated Lucy’s birthday. I won’t tell you exactly how old she is, because I’d like to make it to 90.  Let’s just say that she’s an eighties baby—an early eighties baby. I’ll leave it at that. I can hear the Jaws music as I type this paragraph. It was a special day. We’d planned on doing a Low Country Boil outside, but due to the rain, had to move it into the garage. I just opened the garage door and enjoyed the sound of the rain and celebrated with Lucy and the ladies. It was very special: family, food, and flies. Man, there were lots of flies. They apparently like seafood.
I’ve always thought birthday were overrated. I mean, everybody has one. Everybody. They not only have them, but they have them every single year. While some people do go overboard—yeah, I’m talking to you, you “birthday weekend”, “birthday week” and “birthday month” celebrators. Stop that. Stop that night. I no longer think of them as overrated. They are special. But, all I need is an hour or two with family and friends and a thousand Facebook messages and I’m good to go until next year.
Birthdays really are special, and we should celebrate the births of the special people in our life. Those people are the ones who help make our lives special in the first place, and on or about December 3, God willing, Lucy and I will celebrate the birth of our first child together. We’re fairly certain it’s a boy. Both my father and brother had nothing but boys. We did the swinging string test and everything. We will find out the gender next week. It’d be nice to have a boy. I need a partner in crime at these birthday dinners.
We are blessed and will be excited either way. Our mothers are very happy about having more grandchildren, and Emily is excited about being a big sister. It just hit me that her birthday is December, too. Maybe we’ll have just a “birthday month.”
Jody Fuller is from Opelika. He is a comic, speaker, writer and soldier with three tours of duty in Iraq. He is also a lifetime stutterer. He can be reached at jody@jodyfuller.com. For more information, please visit www.jodyfuller.com