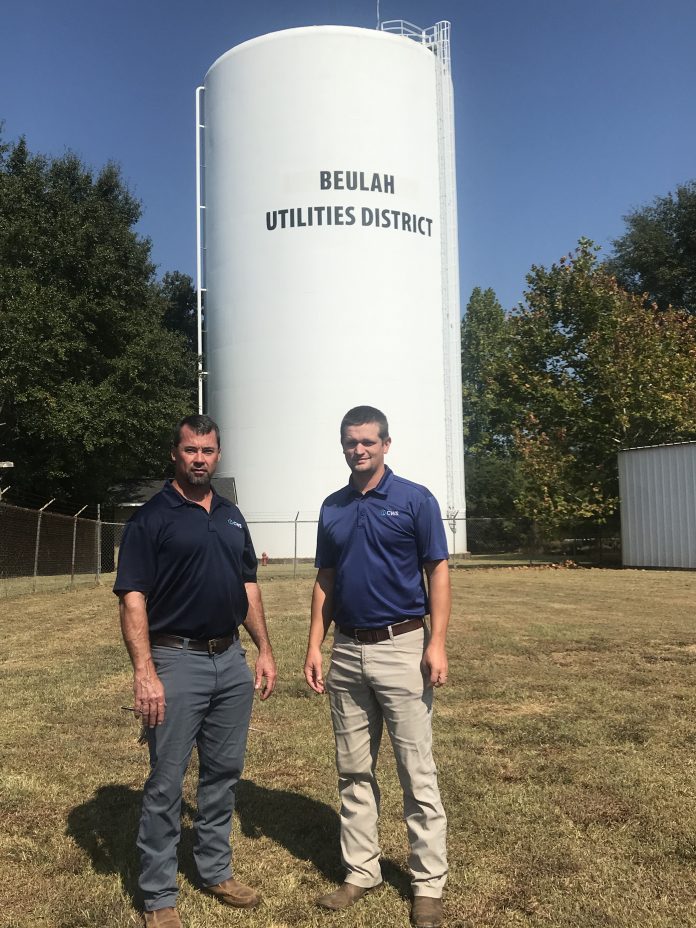 Beulah Utilities District is poised to launch a $5.5 million expansion and improvement project that will add two water tanks and upgrade six water mains to stabilize and increase the water pressure for customers and firefighters.

Lee County Commissioner Robert Ham said that when it is complete in approximately two years, the expansion and improvements will be the culmination of a five-year process to appoint new directors to the board; change the district’s management from East Alabama Water, Sewer and Fire Protection to ClearWater Solutions Inc. and give residents of northeast Lee County a higher level of water, fire and first-responder services. He said that as District 4’s commissioner, he had heard complaints in 2013 from customers of the district who were concerned with the proposed direction of the water and fire systems, and he began to search for solutions because “it was the right thing to do.”

Ham credited ClearWater Solutions and Beulah Utilities Board Chairman Lamar Sims, current members James Majors, Linda Holt, David Jackson and Andrew Bryan and previous board members Dan Roberts and Shane Franks for providing the leadership and expertise to make the transition smooth and effective. Changes were made in the areas of legal representation, certified public accountants, auditors and engineering. Chairman Sims said the board is “very much a working board” and that he values the “tremendous knowledge and input” of the ClearWater Solutions staff.

“They have resources we could never have had,” Ham said. “And the knowledge and expertise we needed.”

Headquartered in Auburn, ClearWater is a leading provider of water and wastewater treatment services to governments, municipalities, private individuals and water districts in the Southeast. Ham said the partnership with ClearWater Solutions as the operations manager has brought significant improvement to the overall distribution system while saving thousands of dollars in management fees and water costs through a dramatic reduction in water loss and customer complaints.

Sims concurred, adding that the relationship with ClearWater Solutions had been a good move and included a local district office site to handle billing, collections and the necessary field work to reduced water loss.

Among Beulah Utilities District’s accomplishments since 2014 are:
-Reductions in system water loss by immediate attention to leaks and system pressures, resulting in an annual savings of approximately $40,000.
-A lower ISO rating (from 6 to a 4) which will provide customers with significant savings on fire insurance premiums (potentially hundreds of dollars per year, based on a home’s value).
-An increase in the value of assets. Due to the improvements and business management decisions made by the board, CWS regional manager Houston Black stated that the assets of the district have increased in value by more than $1 million.
-Favorable financial ratings. As the district has been heavily financed by bond sales, the successful management of the assets, policies and procedures by the board have maintained the long-standing A+ rating and favorable finance rates.
Black, who is ClearWater’s regional manager for East/North Alabama, said the Beulah District provides water as well as fire and rescue services to nearly 3,500 customers. After partnering with ClearWater, the district purchased leak detection equipment, launched an incentive program for the public to report leaks and installed pressure-reducing valves with which it could divide the water system into two separate hydraulic zones. That project stabilized the system’s previously erratic water pressures, therefore reducing the number of leaks and water loss.
Black said the upcoming project will include installation of a 500,000-gallon elevated water tank near Lake Harding and a 300,000-gallon tank on Lee Road 266.
“We estimate about two years to complete it from start to finish,” Black said.
ClearWater’s project manager for Beulah Utilities District is James “Mack” Waites. The office manager is Sabrina Chapman, and Amy Williams is accounts payable clerk. Field staff members are Clay Berry and Bryan Meadows.