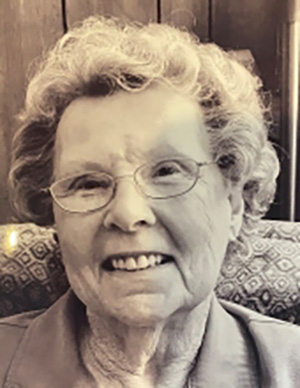 Bette Ann (Moore) Vaughan was born Nov. 20, 1929 in Birmingham, Alabama and passed away after a short illness at the age of 91.

Bette Ann moved to Auburn at three months old where she grew up and became a lifelong, die hard Auburn fan. She was an avid bridge player, excellent seamstress and the heart and strength of her family. Bette Ann lived fully and wore many “hats”. Known as “Nannie” to her dad and brothers, “Bette Ann” to her peers and contemporaries, “Momma” to her three girls and “MaMa” to her grandchildren.

A private memorial service will be held for family and close friends at Frederick-Dean Funeral Home on May 1 at 11 a.m.

In lieu of flowers, donations may be made to First United Methodist Church of Opelika or St. Jude Children’s Research Hospital

“Her children arise and call her blessed, her husband also and he praises her.” Prov. 31:28. We will miss you until we rejoice together again in our heavenly home!