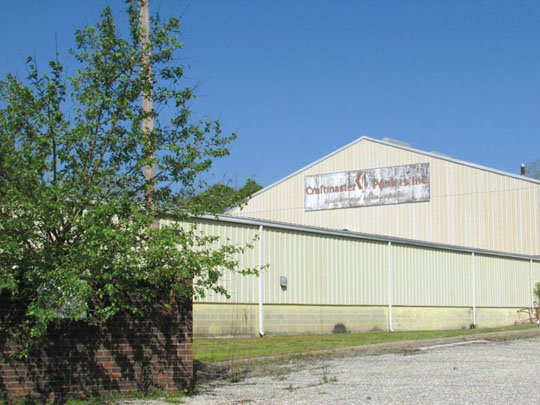 The logistics of the future of the Craftmaster building continue to be an ongoing discussion for the planning commission; most recently, an examination of traffic flow and parking needs dominated the discussion.
Photo by Alison James

Going with the flow was the main objective at Tuesday’s Planning Commission meeting – the flow of traffic that is.

The Craftmaster building redevelopment by Alexander Lee and CIRG Metals is a multistep process the commission and planning staff have taken on. In addition to approving a potential variance on property line, the commission addressed potential problems with traffic load and parking for the new recycling and warehousing business.

Commission members expressed concern, at April 15’s work session, at the inclusion of six tractor trailer parking spaces on the plan for CIRG.

“I would like to see the truck parking at the back as much as possible,” said Chairman Keith Pridgen, expressing disapproval at the idea that trucks or trailers might be parked visibly along a stretch of Geneva Street.

Planning Director Jerry Kelley clarified that those parking spaces would be used in an ancillary way made necessary by the processing of materials being done by CIRG.

“But that’s something different than we heard two months ago,” Kelley agreed.

Brandon Bolt of Bolt Engineering spoke out to allay the commission’s fears.

“(Lee) indicated to me that his typical trailer parking load would need to be two to three space, but he didn’t want to be limited … because during peak business times, he might need to have more out there,” Bolt said.

Although one citizen spoke up in concern for the road condition with the possibility of a high traffic load of trucks traveling in and out, Lee said he still anticipates an average of one to three trucks in and out per day.

With the reassurance that truck parking would be limited to six spaces only, and those located behind a historic home on premise that will be used for office space, thecommission voted its approval for conditional use.

Another traffic dilemma the commission faced was related to the new Guthrie’s being built at Saugahatchee Square, formerly Midway Plaza, on Pepperell Parkway.

Through a combination of odd circumstances, approval was erroneously given to Guthrie’s restaurant owners to cut an entry to their restaurant from Pepperell Parkway; such was never approved by the planning commission.

Prodgen said the concern is the safety of people in traffic “having 100 feet on each side of an access (before the next access).”

“The requirement on an arterial road between turnouts is 400 feet,” Pridgen said. “Prior to the access being put in, there was only 235 feet. Now there’s 100 feet on each side.”

Pridgen and the commission agreed it was not the best solution was to require the access point to be closed completely, but reaching the compromise point might be difficult.

“(Owner) Mike Fimiani feels pretty strongly that he was granted the full access and he deserves to keep it,” said Sean Foote, SR&F architect. “But I think if the alternative was not to have any curb-cut at all, he would very much agree to the right in, right out.”

The “right in, right out” remedy – people could only make right hand turns both into and out of Guthrie’s – would ensure safer ingress and egress of traffic between Pepperell Parkway and Guthrie’s.

“Right now that access is a full access – they can turn left or right,” Pridgen said. “The resolution that I feel may be acceptable … is a right in, right out. Wen they’re coming down the road, you can turn right, but you can’t turn back across traffic.”

Foote produced a rough draft for the implementation of a concrete “porkchop” traffic island in the access point to direct the right in, right out traffic.

The commission voted in favor of the right in, right out compromise.