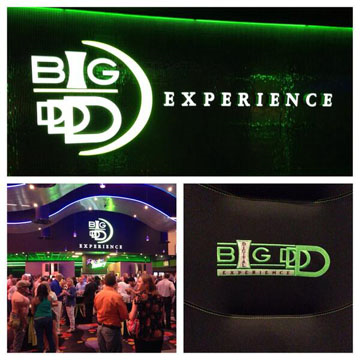 Photos by Daniel Chesser: The Tiger 13 theater is now open off Capps Landing near Tiger Town.

A called work session brought discussion of the requested beer and wine license for the new Carmike Tiger 13 to the table Tuesday.

Gary Krannacker, general manager for the theater, spent some time before the council, answering questions and concerns from both the city council and the public.

“I will be the manager in charge of the integrity of that theater, and you have my personal assurance there will not be alcohol being abused at the theater,” Krannacker said. “It will be served for the enjoyment of our adult guests.”

The request for the license is accompanied by an “alcohol control plan,” which includes the following conditions, among others, for the regulation of the sale of alcohol at the theater:

“All patrons wishing to purchase alcohol will present valid identification for inspection demonstrating they are above the age of 21 at the alcohol sales register.”

“All patrons demonstrating they are 21 years of age or older will be fitted with a wristband marked with the Carmike logo at the designated point of sale. The wristband must be worn at all times the patron wishes to be allowed to purchase or consume alcoholic beverages. Wristbands are non-replaceable and will be made of a material that cannot be removed or refastened without damage.”

“A container of alcohol will have no more than 16 ounces of beer or 8 ounces of wine.”

“Any patron found to have given alcohol to a minor will be required to leave the premises immediately.”

“Containers used to serve alcohol will be translucent plastic vessels and clearly distinguishable from those use to serve non-alcoholic beverages.”

Opposition to the granting of the license has been expressed through numerous platforms, with community members speaking out through email, social media and calls to their council representatives to share their concerns.

“As a representative, I’m representing the people here in Opelika,” said Councilwoman Patsy Jones. “It’s concerning for me … In all fairness, I think all of us should have had the opportunity to sit down at the table and see everything that was being proposed and place it out there in the public the way it needed to be placed there because now we are almost at an adversarial point.”

Jones said she had received a number of calls from concerned citizens.

“I took that very seriously because I understand their concern. I understand what alcohol does. It changes the personality of people,” Jones said.

Krannacker, who reassured the council that he would be “physically appalled if a child had been able to get an alcoholic beverage at a theater I was in charge of,” explained that beer and wine is simply one more amenity Carmike wants to offer patrons, among items like pizza, chicken fingers, cotton candy and, of course, popcorn.

“It’s not about the money,” Krannacker said. “Beer and wine is one amenity at our concession stand … We are just trying to make sure we are able to satisfy all our patrons’ needs, from the children that may want cotton candy to the college professor that may want to enjoy a glass of wine while he sees an art film.”

Despite such not being required, the council permitted community members to speak and share their concerns at the meeting.

“I really don’t see the point of it. Why do you have to have alcohol to go to a movie with your kids?” asked Evelyn Mickle of Opelika. “I read all the DUI’s that are picked up, and I’m afraid even with a two or three glass limit – buzzed is still drunk. As an old nurse, I’ve seen enough of what happens when somebody’s drunk.”

A dozen or more community members attended the meeting, including Kim Key of Auburn, who brought her movie-loving son along.

“I just don’t want some guy sitting next to him drinking beer,” Key said. “I just think it’s a disappointing situation.”

Krannacker explained the theater’s policy on monitoring for drunkenness, using a sophisticated scanner to check IDs and keeping the sale of alcohol separate from the sale of other concession items, but at the end of the meeting, councilmembers were still left with reservations.

“It is my understanding that as we stand today, the council will not be in favor of it,” said council President Eddie Smith. “We’ll continue to study the issue and try to educate ourselves … If in fact the vote is negative, it’s certainly not an indictment toward the Carmike theater. We want you there – we’re invested in it. We are very torn in this issue, in that we all have a significant number of people who have expressed their opinions, pro and con. I want you to know: you’re welcome in Opelika.”

The council will vote on the license, as well as an amendment to the Code of Ordinances that would permit the sale of alcohol in movie theaters, at its meeting May 6. If the council denies the alcohol license, the city and Carmike may discuss it further, or Carmike may appeal to the state.

“The state has total control of the regulation of alcoholic beverages,” said attorney Guy Gunter. “The Alcohol Beverage Control board can issue a beer or wine license without the consent of the city.”

Krannacker said Carmike is willing to work with the city to make sure the whole process goes smoothly.

“We will do everything necessary to assure the citizens of Opelika that we are committed to the safety of everyone who comes through our theater,” Krannacker said.