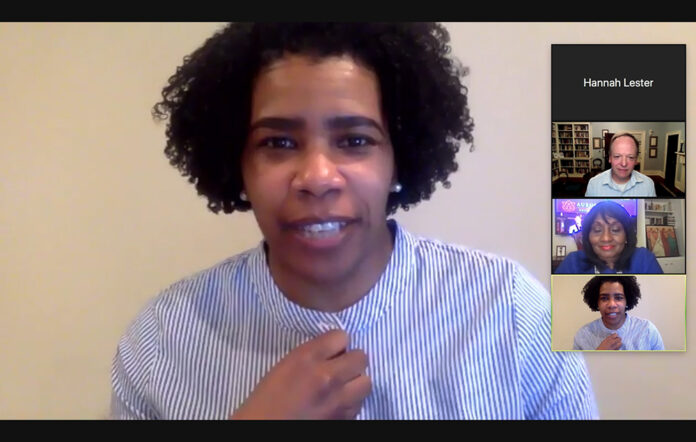 Auburn University continued its discussions on “Becoming the Beloved Community” last week in commemoration of the 56th anniversary of Bloody Sunday.

“Becoming the Beloved Community Amid the Fragility of Democracy and White Supremacy” included the following panelists: Bernard LaFayette, civil rights activist and organizer of the Selma Voting Rights Movement; Bridgett King, associate professor and the master of public administration program director at Auburn University; and Wayne Flint, professor emeritus in the department of history at Auburn University and editor-in-chief of the Online Encyclopedia of Alabama.

The discussion, held via Zoom, was hosted by Mark Wilson, director of the Carolina Marshall Draughon Center for the Arts and Humanities, and Joan Harrell, founder of Becoming the Beloved Community and Auburn University lecturer and diversity coordinator.

“If we were together, here in Alabama 56 years ago on March 1, we would be preparing to march, head toward the Edmund-Pettis bridge,” Harrell said before the discussion began. “So it is within that context that we prepare ourselves to reflect on that commemorative space.”

“How does the history of slavery tie into this question of what is true democracy in the United States,” Harrell asked the panelists to consider.

The Declaration of Independence was written by a man, Thomas Jefferson, who had over 600 slaves, she said.

Did the fragility of democracy begin with a man who owned slaves while also writing that “all men are created equal?” Harrell asked.

King said she doesn’t believe the concept of democracy is fragile.

“What I think is fragile, though, is a version of democracy or democratic practice that is actively inclusive and wants more participation from a larger portion of those individuals we deem eligible,” she said.

LaFayette said that people are better off under democracies than dictatorships and that democracy works with participation from citizens.

“Now, the issue that we’re dealing with here is equal and unequal participation,” he said. “We are affected by the democracy, because if that’s our form of government, we can’t escape it. So now, what is the issue? The issue is whether or not we are full participants in our democracy.”

African Americans have not always been given the right to participate, LaFayette said.

“As black people, we have always been considered less than full human beings,” he said.

Flint said he doesn’t believe that Jefferson’s concept, while owning slaves, was the beginning of the fragility of democracy, but a part of the process.

“If you take the viewpoint that everything in America in 2021 is better than it was in 1776, then that freezes history, rather than makes it a continuum, because history is also aspirational,” he said. “ … I think the problem is, we tend to stop ourselves somewhere on that continuum. We stop ourselves in defense of white nationalism, maybe when emancipation occurred or maybe when Blacks got the right to vote in the 15th amendment.”

The continuum should include the past, present and future: where democracy can be and where things can get better, Flint said.

Harrell asked the panelists whether it is important to prepare young professionals to fight for the right to vote.

Panelists had concrete ideas on how to support democracy and the fight for the right to vote.

Flint said it is important to have parallel institutions; i.e., for those organizations that suppress voting, there should be one promoting voting.

LaFayette said many in the younger generations are not prepared and do not understand their government.

He recommended that young people form their own government, for educational purposes, to learn how laws are made and to learn how elections are held.

“Let’s create a youth legislature, where you would get young people from age 12 to 17 to create their own structure of a legislature, elect officials, replicating the adults who are actually voters,” he said.

King said simply that voting is too complex in the United States. She echoed LaFayette’s sentiments that students need to be taught the basics: the importance of voting and how to vote.

“I really think that if you retreat to the one book, that more than any other is a book, common to all Americans, and you take the four gospels and you just say, ‘What would Jesus do?’ in all of these circumstances, the result would be the beloved community,” Flint said. “As simplistic as it is, I don’t really know any proposed solution that’s wiser.”

“Which of the following do you think is the GREATEST challenge to becoming the Beloved Community?

The rise of white supremacist groups

The widening gap between rich and poor

LaFayette said that while he agrees with Flint that asking ‘What would Jesus do?’ is good advice, there needs to be a curriculum that can be taught.

“If we can give the basic foundations of this kind of thing throughout our institutions, then these young people will get a handle on it and they’ll be able to implement it in their own ways,” he said.

King said that hand-in-hand with that are honest conversations.

“When we talk about love, it’s a lovely word, but as far as I’m concerned, love is an action verb, which means if you care about someone, and you want equality, and you want equal access and all these things, loving someone else also means making sacrifices yourself,” King said. “So, for me, in order for that to happen, that would mean we would all have to agree, particularly those who are in positions of privilege and power, broadly defined, that everything can’t be our way or the highway. And we have to be collectively responsible for our fellow man.”