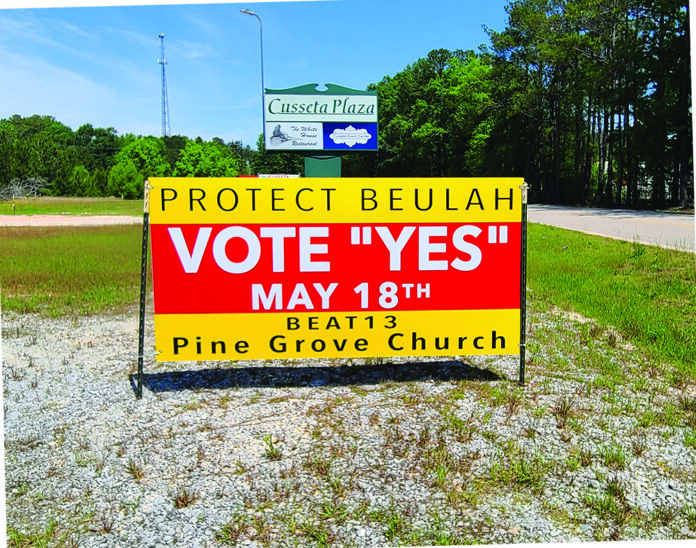 The residents of Lee County’s Beat 13 voted to allow zoning regulations to be developed by a newly appointed planning commission, during a special-called election Tuesday night.
Petitions for the rezoning of Beat 13 were gathered and delivered to the Lee County Commission in February of this year. The effort, spearheaded by Danielle Ritch and Tara Brumfield, was based on the community’s response to a proposed granite quarry that is being planned for land in Beat 13.
“We saw an unprecedented number of voters turnout today,” Brumfield said.”A total of 650 or 23.5 % of the precinct showed up today.”
With 431 yes votes to 219 nays, the Beat 13 community has expressed its opinion on the matter. These results are unofficial until they are certified by the Secretary of State.
“Protect Beulah would like to thank everyone that came out to vote today and to all that continue to show their support,” Brumfield said.
While allowing the area to be subjected to zoning regulations will not automatically prevent the quarry from being developed, residents opposed to the project are hopeful that it will help stop the quarry from becoming a reality.
The election was held Tuesday night despite efforts by a group called Highway 29, LLC, which filed two lawsuits against the Lee County Commissioners and Commission Chairman Judge Bill English in an effort to halt or postpone the special election in Beat 13. The first suit was filed on April 22 in the US District Court for the Middle District of Alabama and the second sued was filed in Lee County’s circuit court, asking the court to issue a temporary restraining order which would have prevented the election from taking place this week. Circuit Court Judge Jacob Walker III ruled against Highway 29, LLC, ending its legal efforts to delay the vote.
Elizabeth Revell, a spokesperson for Creekwood Resources, LLC, said in a message to the Observer that the quarry was not a party [to the lawsuit], and that zoning is a local matter. “Creekwood is looking forward to the public hearing and looks forward to being awarded the remaining required permits,” Revell said.
The ADEM public hearing will be held tonight, May 20, at 6 p.m. at the Opelika Municipal Court which is located at 300 Martin Luther King Blvd. in Opelika.
In order to follow COVID guidelines, only one person will be allowed in the hearing room at a time to address the panel from ADEM. Residents wishing to address the group were encouraged to pre-register, however, registration will be allowed onsite today as well.
The Lee County Commission will be broadcasting the public hearing at the C.S.M. Bennie Adkins Meeting Center and will allow up to 100 citizens to watch the proceedings.