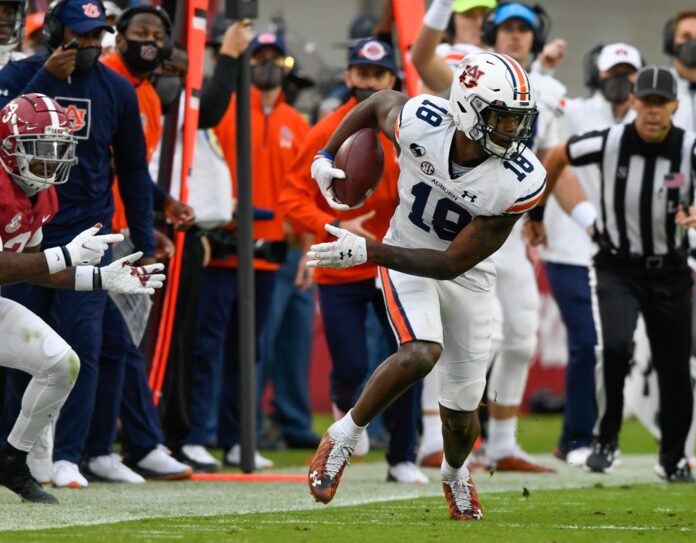 Auburn’s Seth Williams has 1,944 career receiving yards, ranks ninth all-time in career catches and has already cemented his name into Auburn lore with a plethora of breathtaking receptions.

Just before halftime on Saturday in Bryant-Denny, he dropped a catch that he usually makes in his sleep. The drop was by no means what lost the game for Auburn but erased a would-be momentum-swinging touchdown that the Tigers needed desperately.

“In the first half we really didn’t do anything in the first three phases to create any kind of momentum, but we did have an opportunity for the touchdown that we dropped,” said Auburn Head Coach Gus Malzahn.

“You look at the first quarter, and we came out flat,” Malzahn said. “You can’t come out flat against a team like that on the road.”

After moving the ball to the Auburn 42-yard line, the breakthrough looked to have come for Auburn. On first down, Bo Nix threw a beautiful, lofted, timed throw to Seth Williams, who swindled the Alabama back line with a double move and broke free down the middle toward the end zone. The unthinkable happened when the typically sure-handed Williams dropped the wide open would-be touchdown pass. Four plays later, Auburn was gutted when Nix was intercepted by Malachi Moore at the Alabama 28-yard line.

Auburn failed to threaten in the second half, and the Alabama offense barrel rolled the Tiger defense to the tune of 445 total yards. Nix continued to look like a lesser quarterback on the road, throwing two picks. Williams looked out of it mentally after his drop. Tank Bigsby was clearly not 100%. And the much-maligned offensive line gave up four sacks.

Auburn managed a respectable 347 total yards, but 96 of those came on the Tigers’ final 12-play drive, which Mark-Anthony Richards capped off for Auburn’s only touchdown of the game. More indicative of the Tigers’ struggle is Auburn’s 4.3 yards per play compared to Alabama’s 8.4.

Devonta Smith was Jones’ favorite target, finishing with 7 receptions for 171 yards and 2 touchdowns.

The Tide flashed shades of an early-era quick-strike Gus Malzahn Auburn offense on Saturday; they were committed to a formidable rushing attack and able to burn their opponent on big plays. The only difference is instead of Nick Marshall keeping a 35-yard read option, it was Mac Jones, stepping up in the pocket and picking the Tigers apart. Auburn kept the Tide running game relatively in check, holding them 34 yards below their season average, but Alabama’s ability to hit big plays off the play action ultimately did the Tiger defense in.

The Tide were without Head Coach Nick Saban on Saturday, as the most formidable face in college football was relegated to a fan’s role to watch his team dominate in the 84th edition of the Iron Bowl. Saban’s absence didn’t seem to matter; Auburn got beat bad on Saturday, plain and simple.

“Bottom line, they were the better team tonight,” Malzahn said.

Auburn’s record now stands at 5-3, and that performance provided another reason for fans to hop off the Gus Bus. It won’t be easy for Malzahn to get some fans back on his side. The Tigers are tasked with a tough bounce-back game against another top-5 team next week, Texas A&M. That said, we’ve seen this act before.