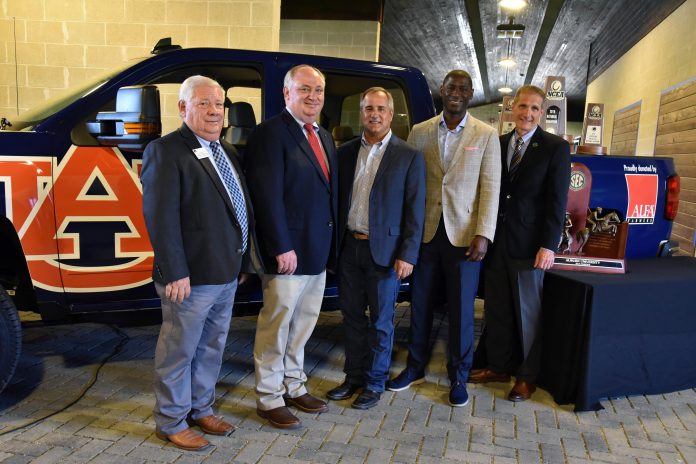 Today, Equestrian Coach Greg Williams accepted the reins of an extra 445 horses in the form of a 2019 Duramax Diesel Chevrolet Silverado 2500, donated by the Alabama Farmers Federation and Alfa Companies.

“This truck is an amazing asset for us,” Williams said. “This is going to be a very nice vehicle to use when accepting donated horses or for safely transporting horses to the Auburn University College of Veterinary Medicine. Plus, we can use it to pick up feed and move laundry for the horses from the equipment room to the barn. It looks so nice, as well. It’s like a marketing piece for our sport. I couldn’t be happier.”

The gift celebrates the Tigers’ 2019 national championship and its undefeated season, the first recorded since the sport was accepted by the National Collegiate Athletic Association (NCAA) in 1998.

The 2018-19 team included 15 seniors who completed their collegiate athletic careers with a 61-10 record, two Southeastern Conference championships and three national championships in 2016, 2018 and 2019l.

“Under Coach Williams’ leadership, Auburn’s equestrian program truly demonstrates a championship culture, resulting in consistent excellence in competition, the classroom and the community,” Auburn Director of Athletics Allen Greene said. “We deeply appreciate the Alabama Farmers Federation and Alfa for their extraordinary generosity.”

“It’s inspiring to see how committed these young women are to this sport, and it’s a pleasure to support the team with this truck donation,” Parnell said, who earned his degree in agricultural business and economics from Auburn. “They’ve definitely gotten a lot of people excited, and that’s a good thing for the entire agricultural community in the state.”

According to a recent study from Auburn, the equine industry adds more than $2 billion into Alabama’s economy and provides about 24,000 jobs.