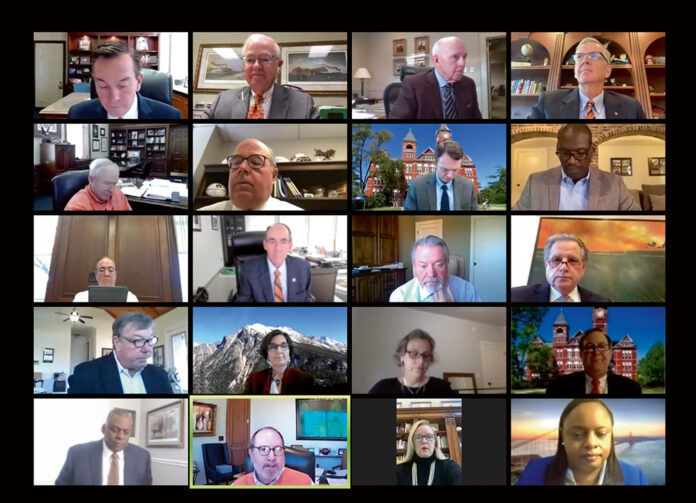 The Auburn University Board of Trustees voted to remove former Gov. Bibb Graves’ name from Graves Amphitheater and Drive during its meeting on Nov. 20.

The decision came as part of the action of a task force created over the summer. The task force was made up of Auburn University Trustees and was asked to look at the current names on buildings.

The former governor was associated with the Ku Klux Klan and rumored to serve as the chapter president of the Montgomery chapter of the Klan.

There was a change.org petition created in the summer of 2020 asking the university to remove Graves’ name from the amphitheater and drive. The petition received more than 2,000 signatures.

“As part of its initial evaluation of Auburn facilities, the task force utilized the parameters of the policy to consider Graves Amphitheater and Graves Drive, each named for former governor Bibb Graves,” said Trustee Elizabeth Huntley, who co-chaired the  task force. “The task force recognizes that removing a name on a structure or building should be an exceptional event, with [consideration] that naming decision made by past board of trustees were well considered and deliberate.

“After considering that high bar, applying the standards and analysis laid out in the new policy just adopted by the board, the task force has determined that retaining Governor Graves’ name on the amphitheater and drive would chill, rather than encourage the broad use of facilities that are intended to be enjoyed…  I hereby recommend the removal of Governor Grave’s name from the amphitheater and the drive.”

Majoring in a STEM field? The Board of Trustees voted to approve an architect selection for the new STEM and Agricultural Sciences Complex Friday.

The board voted to adopt a resolution which would select Goodwin Mills Cawood, located in Birmingham, and Lord Heck Sargent, located in Atlanta, to design the project.

The project was initially voted on in September. The board announced at that time that it would receive $36 million from the state for that project.

The board voted on a similar resolution for the Auburn University Regional Airport Friday.

The airport requested the board to approve a general consultant for airport planning, engineering and administrative services.

Garver Engineers, LLC, located in Huntsville was approved by the Board as the general consultant for the project.

The Board of Trustees initiated a new project for the Harbert College of Business to construct two financial laboratories for Lowder Hall.

“The project will support the College’s Department of Finance by providing state-of-the-art laboratories dedicated to developing the practical skills essential in the financial services industry such as investment banking, asset management and sales and trading,” board of trustee documents said.

Total, the project will encompass 4,000 square feet in Lowder Hall and each lab will hold 50 seats.

Board documents said that the project would be financed by the Harbert College of Business.

The board approved a project to renovate the Hood McPherson Building located in Birmingham, which is used for the Urban Studio Of the College of Architecture, Design and Construction.

The board approved a new Master of Science in supply chain management degree.

The board approved a new Master of Science in applied behavior analysis degree.

The board approved a Master of Science in speech-language pathology degree.

The board voted to close the Bachelor of Science in business administration in international business at Auburn University at Montgomery.

The board voted to close the Bachelor of Science in geographic information systems at Auburn University at Montgomery.

The board voted to close the Master of Teaching writing degree at Auburn University at Montgomery.