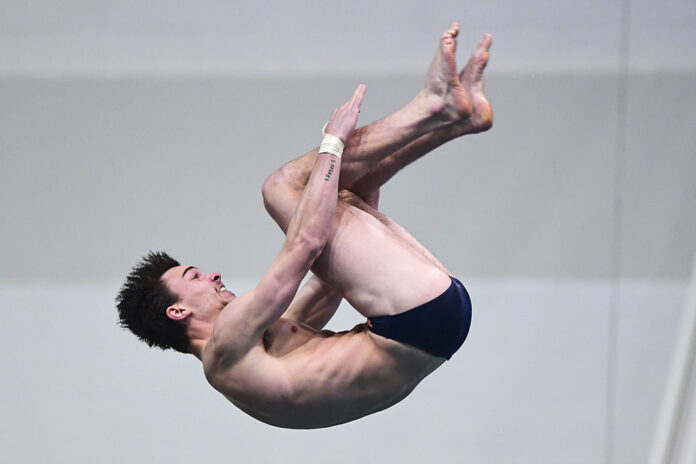 The meet featured six events, in which the host Tigers, LSU, North Carolina and South Carolina all competed from Wednesday to Saturday. Due to COVID-19, no spectators were allowed inside the aquatics center, but a total of 10 Tigers – including five freshmen – still put on a show.

On Wednesday, junior Conner Pruitt kicked off the invitational by pacing the Tigers with 343.95 points to finish third in the 1-meter event. He was followed by Skip Donald, who took fourth place with 323.85 points. Senior Logan Andrews and freshmen David Vargas and Hunter Kebler finished seventh, ninth and 10th respectively in the 11-man field.

Day two of the event featured both men and women Tigers. The men competed in the 3-meter and the women debuted in the 1-meter. Pruitt led the way again for Auburn with a season-high 409.55 points, good enough for another third place score. Andrews and Donald again performed well, finishing sixth and seventh, respectively. For Andrews it was a season high.

“I was pleased with Logan’s progress and Skip,” said Auburn Head Diving Coach Jeff Shaffer. “Skip Logan and Conner all had Zone qualifying scores, so that was a really strong performance.”

For the Auburn women, two divers placed in the top 10 among a field of 17 divers. Sophomore Ashlynn Sullivan scored a team-high 249.10 points to finish eighth, and freshman Maia Goldstein placed ninth. Fellow freshman Megan Ewoldt set a career high with 213.5 points in the finals.

Day three of the event was the most successful for the Tigers. Pruitt paced the field on platform with 402.9 points to close out the meet; it was the  junior’s first time breaking 400 and first win on platform since his freshman year.

“I was real pleased with Conner’s performance,” Shaffer said. “Anytime you go over 400 that’s a solid effort. That’s one of our goals. One of his really strong dives was a back three-and-a-half, which we did just sparingly last year. It’s a dive he needs to do to compete at this level and at the Olympic Trials.”

Pruitt’s teammates were hot on his heels as the Tigers placed 1-2-3 on platform with Vargas placing second and Donald taking third.

On the women’s side, Sullivan recorded a personal best 326.45 points, good enough to finish third in the 3-meter. Two other Tigers placed in the top 10; Sophomore Gretchen Wensuc placed ninth with 275.32 points and Goldstein took 10th with 270.25.

The invitational wrapped up on Saturday with the women’s platform event. Competing on platform for just the second time, Ewoldt set a new personal best – and team-high – with 233.5 points to finish third in the contest.

Sullivan finished fifth and freshman Kendall Minter placed ninth. Goldstein didn’t compete, and Wensuc, an SEC medalist on platform last year, bowed out of the competition due to a wrist injury after just four dives.

The women’s platform wrapped up the  invitational, in which Auburn placed third or better in five of the six events

“It was a really strong competition with quality teams,” Shaffer said. “It showed where we are, it showed what we need to work on, and I think it was an outstanding way to end the fall semester.

“Now we can just take a few days off and recover, regroup and hopefully be able to train without incident when we return back after the holiday break. I think everybody is looking forward to a few days’ rest, being home with family and getting ready for the championship part of the season.”

The Auburn swimming and diving teams will return in January when they open the spring season with a dual meet at Georgia Tech on Saturday, Jan 8.