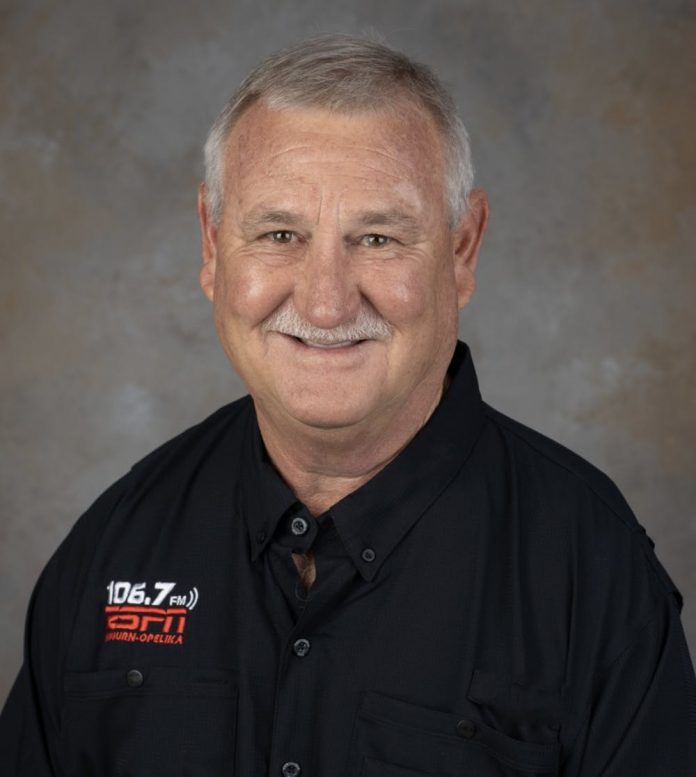 Opelika native and former Auburn High School Athletic Director Chuck Furlow passed away suddenly on Nov. 18 at the age of 72.
The community has been mourning Furlow’s passing, sharing their stories and memories of him on social media.
“Chuck Furlow, thank you for your friendship and all you have done for Auburn High School Football. We honor your legacy (and) our prayers are with you and your family,” said Auburn High School Coach Adam Winegarden.
Auburn Ward 3 Councilwoman Beth Witten described Furlow as being “the salt of the earth” in her post.
Though he is perhaps best known for his role at Auburn High School, Furlow became a beloved voice on The Drive, a local sports-talk show he co-hosted with Bill Cameron on ESPN 106.7 FM.
“This is a very sad time for all of us,” said Mike Hubbard, President of Auburn Network, Inc., parent company of ESPN 106.7. “Chuck was one of the finest men I have ever known and was beloved by everyone here. We were blessed to have him as a part of our team where he shared his vast knowledge of sports and remarkable insights. It is hard to understand when someone as genuine and caring as Chuck is taken from us, but we trust God’s plan and pray that he will watch over and comfort Lynne and the Furlow family.”
Furlow graduated from Opelika High School in 1965 and attended Auburn University.
Beginning his nearly four-decade career in athletic administration in the 1970-1971 school year, Furlow worked at Beulah, Opelika Junior High, Lyman Ward, Beauregard, Gardendale and Jefferson County Schools’s Central Office before returning to Auburn in 1998. In those years, he coached baseball, football and track, serving as athletic director at Lyman Ward, Beauregard and Gardendale and lastly Auburn for 11 years until his retirement in 2009.
According to a press release from ESPN 106.7 FM, Furlow “joined The Drive with Bill Cameron following his retirement and has been an integral part of the on-air team ever since. He also served as color analyst for Auburn High School football broadcasts and appeared on multiple ESPN 106.7 broadcasts” and that Cameron would deliver a special tribute to him on air last Tuesday afternoon.
Outside of sports, Furlow was known for his love of the area, particularly time spent on Lake Martin, and time spent with his family. He is survived by his wife Lynne, three children, eight grandchildren and three great-grandchildren.
Visitation for Furlow was held Thursday at Auburn United Methodist Church’s Founders Chapel from 5 to 7 p.m. A graveside service was held at 11 a.m. Friday in Town Creek Cemetery and a memorial service was held at 3 p.m. Friday at Auburn United Methodist Church’s main sanctuary.