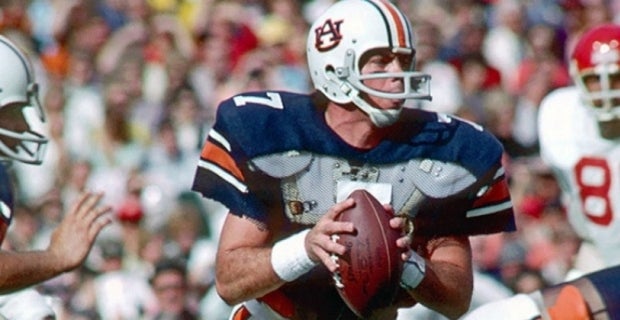 By Phillip Marshall
Special to the
Opelika Observer

Pat Sullivan, beloved former Auburn Heisman Trophy winner and college football icon, passed away in his sleep on Saturday night. He was 69.
Sullivan arrived at Auburn from John Carroll High School in Birmingham in 1968 and won the Heisman Trophy in 1971. He later served as an assistant coach for Pat Dye, helping Auburn win three consecutive championships. He went on to be the head coach at TCU, offensive coordinator at UAB and head coach at Samford before retiring after the 2014 season. He is a member of the College Football Hall of Fame and Alabama Sports Hall of Fame.
Throughout the years, Sullivan was a loyal Auburn supporter and served on the search committee that hired head coach Gus Malzahn.
Sullivan’s courageous battle with mouth cancer in 2003, when he was offensive coordinator at UAB, was a lesson in refusing to give in even in the hardest of times. After 2011, Sullivan took his nourishment through a feeding tube. He later needed oxygen to help him breathe. Both were the result of the radiation treatments that killed the cancer but left him scarred and of damage from a later surgical procedure. In 2014, he coached his final game against Auburn at Jordan-Hare Stadium, where he became an icon. He was honored in an emotional ceremony before the game.
Sullivan remained optimistic and supported Auburn and Samford causes.
Sullivan will be remembered for so many great moments as an Auburn football player – the epic 35-20 victory in the battle of the unbeatens at Georgia in 1971, a comeback from 17 points behind against Alabama in 1970, so many big plays at big times. He and wide receiver Terry Beasley had few equals. “Sullivan to Beasley” became forever a part of college football history.
After playing in the NFL, Sullivan started his own business. He didn’t get into coaching because he wanted to spend time with his children. Finally, in 1986, he joined Dye’s Auburn staff. He tutored Jeff Burger, Reggie Slack and Stan White. In 1992, he left to be the head coach at TCU, where he won a Southwest Conference championship in 1994.
There are no regrets as Sullivan looks out his window and sees Samford players working out on their own. He believes Samford’s 2016 football team, coached by Chris Hatcher, has a chance to be special, and he will be there to offer his support.
“I was blessed,” Sullivan said in an interview in 2016. “I was at the right place at the right time. When I was at John Carroll, we had 23 on our team playing in the top classification. We were fortunate. We had (future Auburn teammates) Dick Schmalz and David Shelby. Our offensive line probably averaged 160 pounds. We threw the ball.
“When I got to Auburn, I had Terry and the different ones. We went from Coach (Shug) Jordan being three yards and a cloud of dust to kind of being open.”
Even as he played in the NFL and was later successful in business, Sullivan believed his calling in life was to coach. He did analysis on Auburn radio broadcasts and coached his son, Patrick, in youth sports. His wife, Jean, was one of Birmingham’s more successful real estate agents. It was she who told her husband it was time for him to follow his heart.
“It was the summer of 1985, right before the season,” Sullivan said. “She said ‘You don’t want to wake up when you are 50 and not be doing what you want to do.’”
“I’ve said it many, many times, and I believe it: What you get out of athletics is the relationships that last for a lifetime,” Sullivan added.
Sullivan is survived by his wife of 50 years, three children and eight grandchildren.
This report was originally published on www.247sports.com.