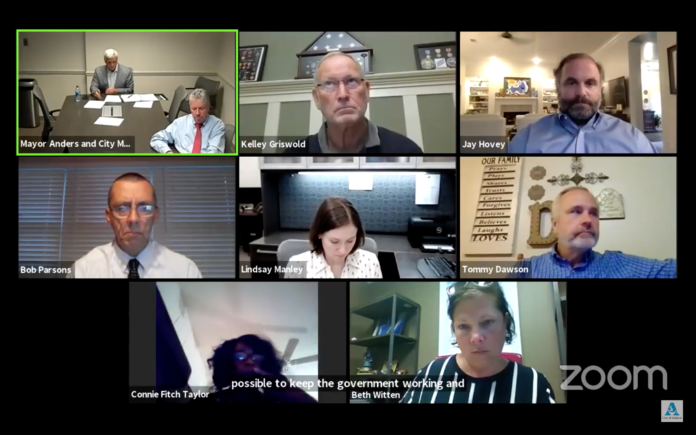 The Auburn City Council extended its state of local emergency during its regular Tuesday night meeting.

The state of local emergency was extended through Oct. 7, which is a few days after Gov. Kay Ivey’s safer at home order is set to expire.

“Leading up to tonight’s meeting I have spent time talking to leadership from the hospital, as well as the university to gauge where did they think we were in regards to our current order and what our current order is addressing,” said Auburn Mayor Ron Anders.

The current order specifies that bar patrons must be seated in order to receive a drink, and the council aimed to eliminate a lack of social distancing when it first set the ordinance in place.

Both EAMC and The Auburn University Medical Clinic asked Anders and the council to extend the ordinance, the mayor said.

“We’ve seen positive numbers that have come from the medical center and from the university and we are happy to see that those cases, that the hospitalizations seem to be stabilized and came down over the weekend in our latest numbers that were shared,” Anders said.

Despite this, the council extended the local state of emergency, though not all council members were on board to do so.

“I appreciate what we’ve tried to do, at least in essence here with this order, and frankly despite those reports, positive reports from our hospital and university, I’m not going to support an extension of this order,” said Ward 7 Council Member Jay Hovey.

He said that the businesses do not want an extension and he sees this as hurtful to local businesses, especially since there are a lot of cases of noncompliance outside of the bars.

“We can’t legislate morality, we can’t legislate common sense but we can legislate someone out of business and I just don’t think that this is going to be the magic wand that keeps these students from congregating,” Hovey said.

Ward 3 Council Member Beth Whitten proposed an amendment that would end the extension on Oct. 2 to match when Ivey’s order ends. This was not approved, however.

She also said that the Alabama Beverage Licenses Association will release an Alabama Bar Promise this week asking local bars to adhere to guidelines. Whitten asked that the council encourage local businesses to sign.

Anders said that he looks forward to when things can return to normal, but that the time has not arrived.

Football will come to Auburn soon on Sept. 26 and although there are restrictions set in place by the university, the city is making some exceptions.

The city voted to create an entertainment district for downtown Auburn on the first two game days, Sept. 26 and Oct. 3, which allows patrons to stand outside of establishments to drink.

City Manager Jim Buston said he thinks this will help social distancing because it allows patrons to go outside rather than be forced to stay in the bar or restaurant to consume their drink.

There is also the matter of rolling Toomer’s Corner after a win.

Ward 4 Council Member Brett Smith asked how that would be addressed on game days and how many people are allowed to gather in one place under Ivey’s order.

“I think it is 50,” Buston said. “However, that’s one of those things that it’s hard to enforce. We looked the other way basically when the protests where going on in downtown Auburn. There were more people gathered than what the governor’s order allowed.”

“I think it would be a travesty not to allow rolling Toomer’s Corner if we win,” he said. “If we’re going to allow people to protest some of our police officers, I can’t go along with that.”