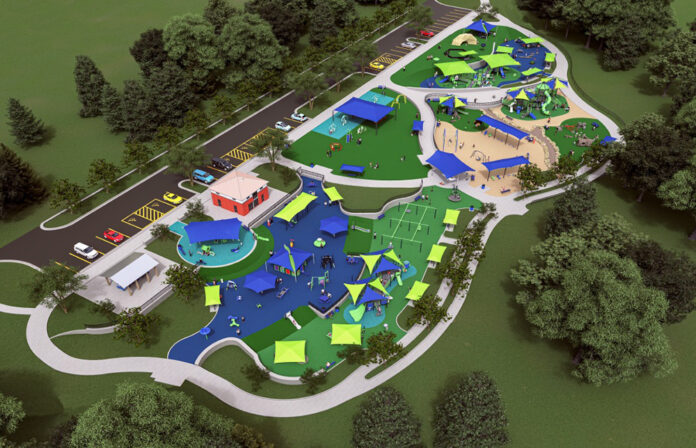 The council approved a contract with D&J Enterprises, Inc. for construction on the inclusive playground project for over $1.96 million.

The contact includes the cost of labor, equipment and materials. A parking lot will be constructed, along with storm drain installation, retaining walls, concrete sidewalks and ramps.

The council also approved a contract with Miracle Recreation Equip. Co. for equipping, surfing and installation for the park for over $1.95 million.

The park will include an “observation area” on a terrace, a play area with multiple ways to access it, play equipment that will support ADA accessibility and a nature study area.

According to the renderings included in the e-packet, the park will include play equipment such as a bouldering wall, swings adapted to suite wheelchairs, slides, play structures and more.

Parks and Recreation Director Becky Richardson said that the park will be composed of pods of different equipment.

Additionally the park will contain exercise equipment that adults could use while the children play, Richardson said.

“I just really support this project and I just wanted to bring it out and just thank all of the staff that worked on this and getting this to happen and the parks and rec board, of course, for getting this moving as well,” said Ward 5 Council Member Steven Dixon. “I just wanted to basically just thank everybody and I’m looking forward to having this. It’s going to be a great addition to our community where kids can play together no matter what.”

“We had a conference call last week with the leadership of the city of Opelika, as well as the East Alabama Medical Center, to talk about vaccines, vaccine distribution, vaccine opportunities,” said Auburn Mayor Ron Anders.

City Manager Jim Buston said that the answers to many of the questions residents are asking, such as when they can get the vaccine, is information the city does not have.

However, for those who are currently eligible, the vaccine is being distributed at East Alabama Medical Center, the Lee County Health Department, the Auburn University Medical Clinic, Thomas Pharmacy and Auburn Urgent Care.

The Auburn council approved a resolution for conditional use approval for Brett Basquin on behalf of Owens Family Partnership, LLC for the property.

The type of restaurant, which will be located at 1850 Shug Jordan Parkway, was not named.

“Tonight is Jim’s final meeting, and Jim I want you to know how much I appreciate everything you have done for our city, that you have done personally,” Anders said. “You have been a great source of support, and information and advice to a brand new mayor and Auburn is thankful for everything that you have done to serve its citizens and to serve all of us. So thank you. You’ve had a great career and we will miss you.”

Many of the council members, and the mayor included, were new to the council as of two years ago. Although they may not have worked with Buston long, many shared words of thanks.

“You certainly helped me out on numerous occasions being a rookie council member, and that really meant a lot to have that kind of steady guidance there,” said Council Member Bob Parsons. “So, thanks a lot and I really wish you the best with whatever future you decide you want to take. And good luck.”

Mayor Pro Tem Beth Witten said she hopes she can continue to ask advice of Buston after he’s left the position.

“Jim put in a plan for potential zombie apocalypse or Godzilla attack on the city” he said. “I asked and he said we did. He showed me proof of that.”

Megan McGowen Crouch will soon step into Buston’s position. The next meeting will be held on Feb. 2 on Zoom.

The council approved a contract with Bodine’s Landscape Services, Inc. to install new trees at the intersection of North College Street and East University Drive for just under $22,000.

The council approved a contract with the Loachapoka Water Authority for utility relocation/intersection improvements at the roundabout at the intersection of Wire Road and Cox Road for over $133,000.

The council approved a contract with Otto Environmental Systems, LLC for the purchase of 560 recycling carts for over $30,000.

The council approved an ordinance to participate in the 2021 Severe Weather Preparedness Tax Holiday.

The council approved an annexation ordinance for a property located at 4989 AL Highway 147 N.

The council approved to zone 81 acres as conservation overlay district to a property located in the 1700 block of Pierce Chapel Road.