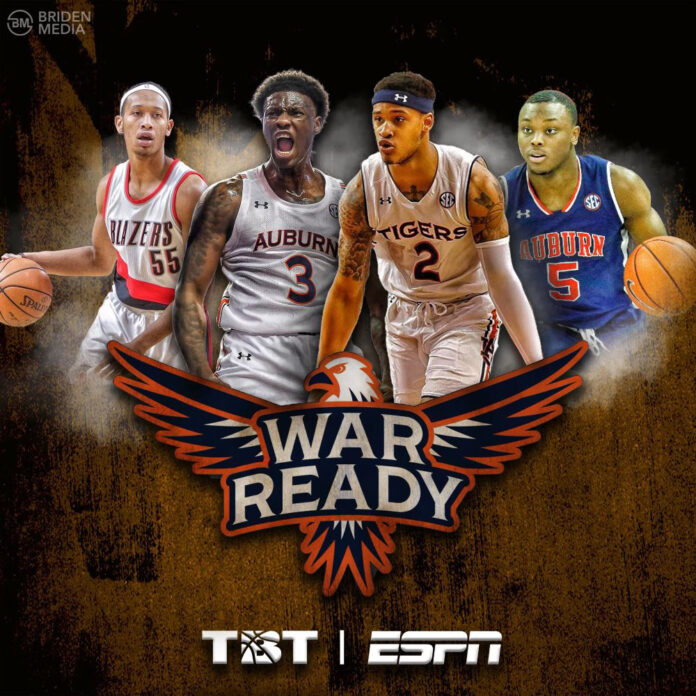 For the third year running, a group of Auburn basketball alumni are coming together to compete for the $1 million grand prize in The Basketball Tournament (TBT).

TBT is a winner-take-all, single-elimination basketball tournament featuring 64 teams across eight different regions, beginning on July 16 at New York City’s historic Rucker Park. The competition has been running since 2014.

The team in the tournament getting most Auburn fans excited is “War Ready”. A version of the team has competed the previous two years, but were handily eliminated in the first round on both attempts. War Ready hopes to reverse those fortunes this year with what appears to be its strongest roster yet.

The strength of this team figure to be its backcourt, with Williams and Brown possessing NBA experience on their resume. Heron (a former five-star recruit) and Dunans (a standout from the second and third year of the Bruce Pearl era at Auburn) bolster the backcourt as key, former Auburn players as well. LSU’s Quarteman, Robinson and O’Reilly give team War Ready further guard depth to run teams off the floor with small ball lineups. Purifoy, Dunbar, Cokley and Sullivan will provide the size and athleticism in the paint.

It’s a make-or-break year for team War Ready in all honesty. Generating loads of buzz in year one and two of participating in TBT, Auburn’s mostly-alumni team had two unimpressive showings. Excitement started off slowly when the team announced its return in 2022, but has risen with more additions like Heron and Brown joining the team. Brown was announced as a player late in 2021, but was a scratch from the playing roster just before the tournament.

Former Auburn player Frankie Sullivan returns as the team’s head coach, and last-year player and former Tiger Laron Smith moves to the bench as assistant coach. Jeremy Calzone rounds off the coaching staff and Matt Moschella is the general manger for the third year running.

This year, TBT features a plethora of recognizable names from college and NBA days of old. 33-year-old Jimmer Fredette – former BYU National Player of the Year and the 10th overall selection in the 2011 NBA Draft — headlines the talent. Joining Fredette on team Overtime Elite is some new basketball talent as well — brothers Ausar and Amen Thompson — both of whom are projected to be lottery picks in the 2023 NBA Draft. Former NBA players Omari Spellman and C.J. Miles are two other notable names that make up a field of 71 players with NBA experience.

War Ready enters this year’s TBT as the No. 6 seed in the Charleston, West Virginia, regional. Its first game will be against WoCo Showtime, a Wofford University Alumni team. 2021 team War Ready player Fletcher Magee — one of college basketball’s most prolific 3-point shooters of the last decade — headlines the team. War Ready begins its TBT journey on July 24 at 2 p.m.

While TBT appeals to all basketball fans — especially those with a soft spot in their heart for nostalgia and reliving the ‘good-ole days’ — the casual viewer might be confused if they tune in and witness the end of a game.

TBT doesn’t complete games like traditional basketball games are completed. In fact, the tournament rules dictate an ending that turns the running clock off altogether. TBT calls it the “Elam Ending”. Instead of calling the game complete when the game clock hits 0:00, TBT pauses the game when the game clock has expired, adds eight points to the leading team’s score and then the first team to reach that target score (without the pressure of a game clock), is declared the winner.

The point of the end-of-game style is to reduce time-wasting schemes and force teams to focus on getting stops. The result is a higher-level of end-of-game intensity and an emphasis on shot making. The revised way to end a game has generated so much popularity that the NBA implemented the Elam Ending in its all-star game in 2020.