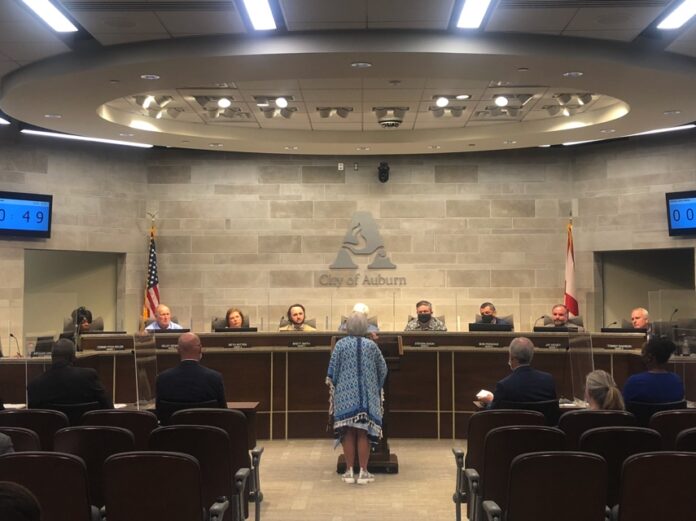 The Auburn City Council adopted the U.S. Highway 280 Focus Area Study Plan Tuesday night during the council meeting, which included the amendment of the CompPlan 2030.

The CompPlan 2030 is the city’s planning and guide for growth in Auburn.

“The United States Highway (US) 280 Corridor Focus area was created as part of the February 2018 five‐year update to CompPlan 2030,” the city’s e-packet said. “This area has had increased development interest since 2011 as a result of the City of Auburn’s population growth.”

Griswold said his reasoning for changing the limited residential back to rural has to do with acreage sized allowed.

Under Limited Residential Development, one-acre plots are allowed, rather than 3-acre plots under rural.

This would increase the traffic in the area and three residents all spoke up during the public meeting in favor of keeping the zoning rural.

The city did take comment from citizens leading up to the Focus Area Study Plan approval.

Citizens gave input on everything from the desire for more sidewalks, development of Saugahatchee Creek as a blueway/greenway system or putting in a kayak put-in, landscaping and more.

“Outside of these specific points of discussion, residents recognize that the city is growing and development will continue to occur in the area, but were appreciative that the city is pro-actively developing a plan and that a second open house was held,” the city’s e-packet said.

The city of Auburn amended the city code Tuesday night to adopt the 2021 Editions of International Building Code and International Fire Code.

“This ordinance with amendments will establish the International Building Codes, Building, Residential, Fire, Plumbing, Mechanical, Fuel Gas, Existing Building and Electrical as the model building codes for new construction, additions, alterations and life safety in the city of Auburn,” said the city’s e-packet.

“The city of Auburn (City) Inspection Services Department routinely researches and evaluates changes in codes that protect the health, safety and welfare of our residents,” said a memorandum from Scott Cummings, executive director of developmental services to City Manager Megan Crouch.

Cummings said that inspection services met with stakeholders to determine the best course of action for the codes.

“Following adoption staff plans to engage stakeholders further to promote additional education and outreach concerning these proposed changes prior to the implementation thereof,” Cummings said. “It is our desire to be able to contribute to the progress the city has experienced through the years and provide for the longevity, flexibility and enjoyment of the use of all structures built in the city. These recommendations support the strategy established with our zoning regulations and elevate the quality even further for new construction in Auburn.”

“In the City Code, Sidewalk Sales are authorized around city holidays, with a specific list of holidays included,” the city’s e-packet said. “Rather than add Juneteenth to this list of official City holidays during which sales are allowed, this ordinance updates City Code to remove the list and instead refer to official city holidays, which now include Juneteenth. Should the list of holidays change in the future, the sidewalk sales section of the code will now remain accurate without amendment.”

• The council approved an alcohol beverage license for Seafood Auburn, LLC for The Juicy Seafood Restaurant.

• The council approved the purchase of a Stivers Ford 2021 Police Interceptor Unit for over $37,000 for the Public Safety Department.

• The council approved the purchase of 18 Dell VxRail capacity drives for over $19,000.

• The council approved a contract with Timmons Group for the customer support and maintenance of the Permit Portal and Cityworks PLL for $24,000.

• The council approved customer support renewal through Southern Software, Inc. for over $20,000 for the Public Safety Department.

• The council authorized emergency expenditure with Hall’s Tree Service for over $24,700.

• The coucil approved the FY21 Community Development Block Grant Resurfacing Project with D&J Enterprises for over $279,000.

• The council approved a board appointment to the Lee County Youth Development Center.

• The council approved the establishment of two stops signs in Camden West.

The next meeting will be held on Sept. 21.