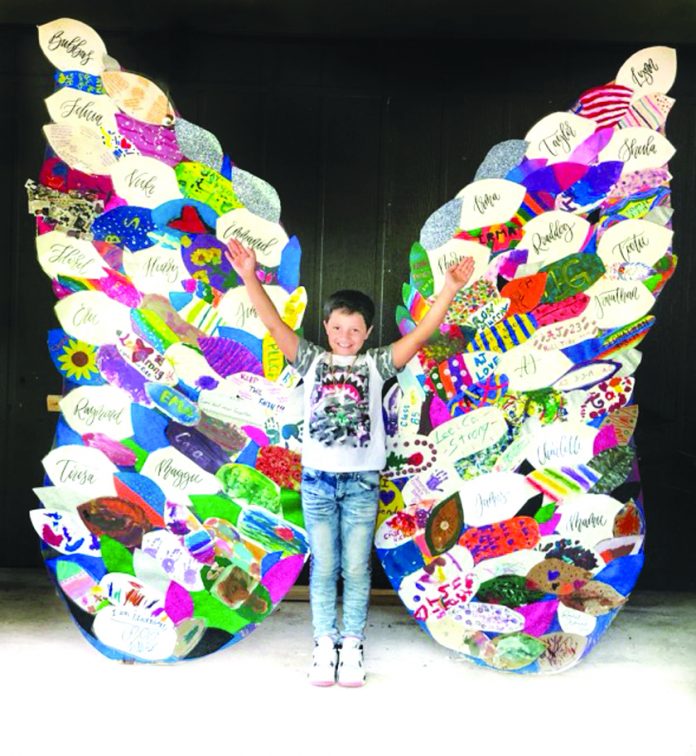 Local artist Rachel Wright and nearly 50 Beauregard and Lee County residents came together last Thursday night to celebrate the dedication of the “Beauregard Angel Wings” art installation at Sanford Middle School.
During an interview with the Observer in May, Wright said she was inspired to create a piece of artwork that the community could help create after meeting with March 3 tornado survivors and family members of the 23 storm victims.
“I wanted to do something that was beautiful and all-encompassing, as well as something that people affected by the storm could participate in. Then (one of the victim’s family members) talked about ‘their angel,’ and it just clicked for me right there,” Wright said.
Throughout the summer, Wright said more than 300 individuals hand-painted feathers that comprise the piece.
A candlelight vigil was held in addition to the dedication during Thursday’s ceremony. With the school serving essentially as a “ground zero” for tornado recovery and relief, Wright said the light, paired with the art piece, helped shine a light in a place that saw so much darkness earlier this year.
“We did a candlelit vigil and had a moment of silence after calling out each person’s name. It was very uplifting and of course, emotional,” Wright said. “Everyone was so thankful for the wings and the light.”
Wright said she hopes the piece is both an inspiration and a reminder for future Sanford students of a tragedy that brought the community together in a way that has never been seen before.
“Children who were in the tornado walk those halls (including Kayla Grimes and Jordan Griffin). Having them see their artwork for their parents and brother and friends and for the whole community to show them that we all will never forget and we can make beauty for them in those halls is important,” Wright said.