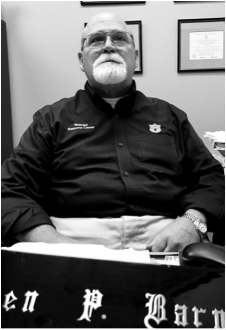 Helping veterans is nothing new to Steve Barnard – he’s been doing it all of his adult life.
“When I think of student veterans, a quote by Theodore Roosevelt comes to mind: “A man who is good enough to shed his blood for his country is good enough to be given a square deal afterwards,’” Barnard said.
As Assistant Director of Auburn University’s Veterans Resource Center, he helps student veterans navigate the Veteran Administration’s educational benefit certification process.
With more than two decades of experience in education, he guides student veterans through the ins-and-outs of college life and as a 12 year United States Army Officer and veteran, he helps student veterans with life in general.
Prior to opening the state-of-the-art Veterans Resource Center opened in 2012, Barnard was called on to establish a student veteran affairs office in Mary Martin Hall to support the influx of student veterans taking advantage of the newly passed Post 9/11 educational benefits. His efforts helped form the foundation of Auburn’s campus-based veteran resources and contributed significantly to the university’s certification as a “Military Friendly” campus.
Many of Barnard’s successes can be attributed to a strong academic background and his military service experiences. He entered the U.S. Army as a 2nd Lieutenant in December of 1973 and reported to his first assignment at Fort Dix in New Jersey as Assistant Operations Officer. Other assignments include: Fort Benning, Georgia; South Korea, Aberdeen Proving Grounds, Maryland; Frankfurt, Germany and Military District Washington D.C.
Of all of his assignments, two stand out the most. The first was his tour in South Korea.
“It was my first overseas assignment, but particularly noteworthy is I reported to the 2nd Infantry Division as the Personnel Officer and shortly thereafter assumed the duties as Brigade Adjutant,” Barnard said. The second, and most favorite was his tour in Germany.
“I was detailed in as a Captain (0-3) to fill the billet as the Property Book Manager for the 3rd Armored Division. On paper, I was accountable for just about everything with a serial number that we had spread out across Europe,” Barnard said.
As Barnard reflects on his military service and his time spent helping student veterans on the Plains, a smile comes to his face.
“Having the privilege of serving as an ambassador of the United States Army, and all that which it stood for to the other countries and armies of the world, was the best. I have always enjoyed being around and helping people, especially veterans.”
Editor’s Note: Mr. Barnard’s story was slated to run in our Veterans Day publication earlier this month, but was pulled due to space issues. Each veteran’s story is one deserving to be told, which is something the Observer has done and will always continue to do.