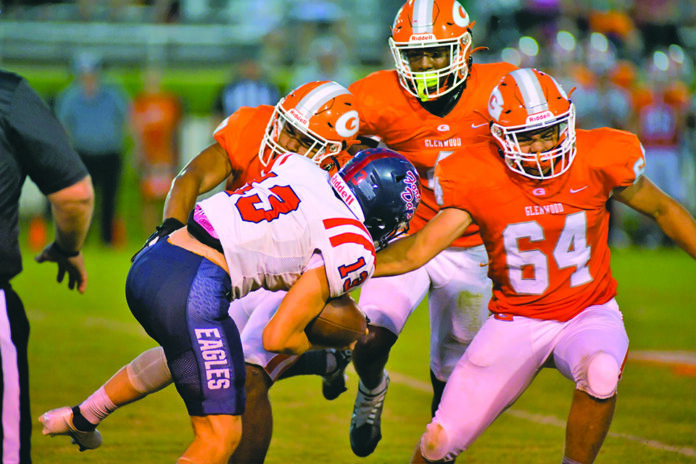 The varsity area high school football teams from Auburn, Opelika, Beauregard, Loachapoka and Lee-Scott maintained their perfect starts to the season. Smiths Station broke an eight-game losing streak to region opponent Prattville and Glenwood got its first victory under a new regime in week three of the Alabama high school football season.

The following is a breakdown of how each team fared. All stats were compiled first-hand, by school sources or Maxpreps.com.

The varsity Auburn High School (2-0, R 1-0) football team defeated region opponent Dothan (2-1) Friday night to move to 1-0 in the region. Auburn quarterbacks Clyde Pittman and Davis Harsin combined to toss four touchdowns in the first half as the Tigers opened a gaping lead. In their next game, the Tigers face the Jefferson Davis Volunteers (1-3) at home in a 7A Region 2 bout this Friday, Sept. 9.

The varsity Hornets (3-0, R 1-0) remained perfect Friday night, earning their first region win of the season with a 31-14 victory over Valley (1-2, R 0-1). Beauregard quarterback AJ Wallace accounted for 270 total yards and two touchdowns to lead the offense. The Hornets jumped out to a 17-0 lead before the teams traded touchdown scores. In his second season in charge at Beauregard, head coach Jason Jones will look for his Hornets to move to 4-0 on the season when they play Tallassee (2-1, R 0-1) at home, Friday, Sept. 9.

The varsity Beulah Bobcats (0-3, R 0-1) fell to Saks Academy (2-1), 48-6, Friday in a non-region road test. Sophomore receiver Drew Duval was responsible for the lone Beulah touchdown. The Bobcats will continue their search for win No. 1 on the season this Friday, Sept. 9, in a home region game versus Wellborn (1-1).

Loachapoka (3-0, R 1-0) remained perfect to begin its season by beating the Verbena Red Devils (2-1, R 0-1) 14-0. Buoyed by a 90-yard interception-returned-for-touchdown via Auburn commit JC Hart, the Loachapoka defense kept Verbena’s offense at bay for most of the contest. Loachapoka has a home region game versus Central of Hayneville (0-2, R 0-1) Friday, Sept. 9.

Following last week’s bye, the Lee-Scott varsity football team recorded its second shutout in as many games in the 2022 season, defeating Monroe Academy (1-2, R 0-1), 45-0. Senior quarterback Ryan Dearing went 5-for-10 passing with 132 yards, two touchdowns and one interception. Jake White led the team in receiving, catching five passes for 108 yards and two TD’s — along with 45 rushing yards on four carries. George Meyers carried the ball six times for 39 yards and two touchdowns, and seven players carried the ball for the Warriors in total. Lee-Scott outgained Monroe Academy 483 to 152 in the win. The Warriors take the field again Friday, Sept. 9 in an away matchup against Morgan Academy (1-1).

First year Glenwood head coach Ryan Nelson recording his first win Friday as his Gators (1-2, R) defeated Fort Dale Academy, 40-21. Glenwood outgained the Eagles, 442 yards to 374, and both teams finished with one turnover. The Gators next play host to Bessemer Academy (0-2) on Friday, Sept. 9, in an AISA Class 3A battle.