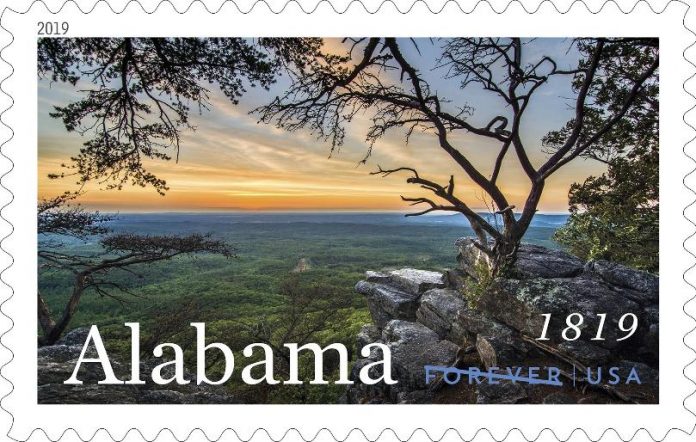 The U.S. Postal Service celebrates the bicentennial of Alabama statehood with the issuance of the Alabama Statehood Forever stamp.
The first day of issue will be Feb. 23.
Alabama became the 22nd state in the union on Dec. 14, 1819. News of the stamp is being shared with the hashtags #AlabamaStamp and #Alabama200.
Alabama’s rich history stretches from its earliest inhabitants and settlement by European colonists to its significant role in the civil rights movement and its participation in the nation’s space program. The state was at the center of many important events in the civil rights movement of the 1950s and 1960s, including the 1965 Voting Rights March from Selma to Montgomery, a route now commemorated as a National Historic Trail.
The Alabama Statehood stamp features an existing photograph taken at sunset on May 28, 2017, in Cheaha State Park. Alabama photographer Joe Miller shot the picture from the park’s Pulpit Rock Trail. Art Director William Gicker designed the stamp.
The Alabama Statehood stamp is being issued as a Forever stamp and will always be equal in value to the current First-Class Mail 1-ounce price.
Customers may purchase stamps and other philatelic products through the Postal Store at usps.com/shop, by calling 800-STAMP24 (800-782-6724), by mail through USA Philatelic catalog or at Post Office locations nationwide.
The Postal Service receives no tax dollars for operating expenses and relies on the sale of postage, products and services to fund its operations.