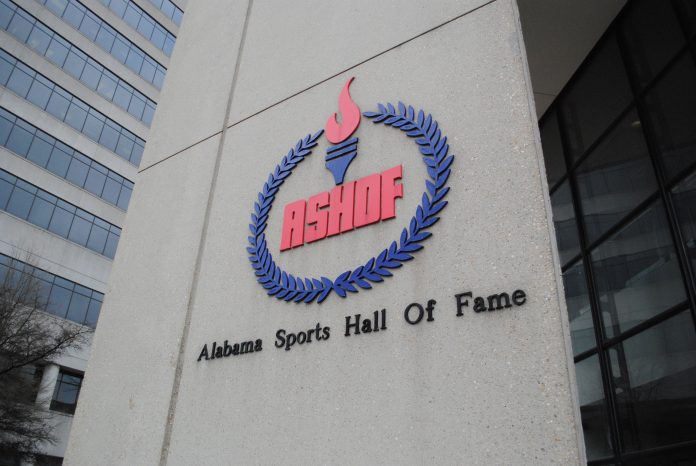 The Board of Directors of the State of Alabama Sports Hall of Fame is pleased to announce the Class of 2020 to be inducted into the Alabama Sports Hall of Fame on May 2, 2020. The class was selected by ballot through a statewide selection committee; votes were tabulated by the firm of PricewaterhouseCoopers.
The newly elected inductees for the Class of 2020 are as follows:
-Ronnie Brown
-Sylvester Croom
-Doug Kennedy
-Q.V. Lowe
-Woody McCorvey
-Jorge Posada
-Duane Reboul and
-Steve Shaw.
Starting with the first class in 1969, this will be the 52nd Class inducted into the Alabama Sports Hall of Fame. The eight newly elected inductees will bring the total number of inductees to 369.
The 52nd Annual Induction Banquet and Ceremony will be held in the Birmingham Ballroom, at the Sheraton Birmingham Hotel, on May 2, 2020. For more information or to purchase tickets, contact the Alabama Sports Hall of Fame Museum at 205-323-6665.
Following are biographies on athletes of local interest:
Brown – Born Dec. 12, 1981 in Rome, Georgia, Brown played running back at Auburn University from 2000 to 2004. He finished seventh in school history in rushing yards and fifth in rushing touchdowns. Brown was the 2003 Citrus Bowl MVP. Drafted second overall by the Miami Dolphins in the 2005 NFL Draft, he started at running back the first four weeks of the season. In the 2008 season, he had 916 yards and 10 touchdowns, leading to his Pro Bowl selection. In 2010, Brown started all 16 games with the Dolphins. He played six seasons with Miami and went on to play with the Philadelphia Eagles, San Diego Chargers and Houston Texans. He retired in 2014 with the Chargers.
Croom – Born Sept. 25, 1954 in Tuscaloosa, Croom played center from 1972-1974 at the University of Alabama. During his college career, he was awarded the Jacobs Blocking Trophy and also earned All-American honors. Croom helped the Crimson Tide win three SEC championships and the National Championship in 1973. He played one year in the NFL for the New Orleans Saints before returning to Tuscaloosa to coach. Croom was an assistant at Alabama for 11 seasons under Coach Paul Bryant and Coach Ray Perkins. He then spent 17 years coaching in the NFL. In 2004, he was named head coach at Mississippi State University, making him the first African-American head football coach in the Southeastern Conference. For the 2007 season, Croom was voted SEC Coach of the Year. After Croom’s time at Mississippi State, he served as running backs coach in the NFL for the Rams, Jaguars and Titans.
Lowe – Born Jan. 15, 1945 in Red Level, Lowe played at both Gulf Coast Community College and Auburn University. As a pitcher at Auburn, he went 23-3 with a winning percentage of .885 in two years. He set an Auburn record at that time of a career ERA of 1.69 and most complete games in one season (10). During his senior season, he went 15-1 and helped lead Auburn to the 1967 College World Series. After his playing career, he was a coach and manager in the minor leagues for the Chicago Cubs, New York Yankees and Montreal Expos farm teams. In 1986, he established the baseball program at Auburn University-Montgomery. He won 1,127 games at AUM, and led them to the NAIA World Series three times, finishing second in 1990. His teams won six conference championships and he was named NAIA Coach of the Year in 1990. In 2007, he was named Alabama Baseball Coaches Association College Coach of the Year; the Auburn Walk of Fame in 1998 and the Alabama Coaches Hall of Fame in 2005.