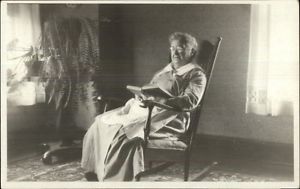 She’s almost ninety-six. And when she talks, it sounds like lightning bugs, swarming over a mossy pond.

She admits, most days she doesn’t do much talking. She sits beside her window, reading, or sleeping. But she has good eyes, she has her mind, and she still has a voice.

“Started making up songs when I’s a girl,” she says. “They helped me through some very hard times.”

The hardest of times, you might say. She asks me not to dwell on this part of her story—so I won’t. But when she was ten, her father killed her mother, then himself.

Her brother and sister raised her. Her childhood was spent in a plain, plank house beside a creek. She led a lonely life—kids her age rejected her.

Her first made-up song was meant to help her sleep.

“Got so dark in my bedroom,” she says. “Thought I’s seeing ghosts and spirits, it was terrible.”

Her voice is cracked and old. Sweet, but sad.

I wish she’d hold me.

After the War, she fell in love. They settled and had two kids. She helped him forget a battlefield. He helped her forget childhood trauma. He played guitar. She sang.

She made many songs with him. Like the one for her son, when he fell from a tree.

“Oh, John, don’t you frown,
It ain’t right to get so down,
Dosey-doh, and don’t you know,
There’s always someone sadder…”

When she was in her thirties, her pastor asked if she’d lead the Sunday singing. She did.

She played piano for nearly twenty-five years. And on rare occasions, she would sing her own songs before the church.

“I’d never tell nobody they’s my songs,” she says. “I sung them to people who needed cheering up.”

Last Christmas, her son bought her an iPad. He taught her how to record her voice. She’s already recorded homemade melodies for her family. Many of which date back to the nineteen-twenties.

“Wish I could remember EVERY song I made up,” she says. “But I only remember ones that helped me most.”

Sometimes, she still leads singing for her assisted-living home. Wheelchairs gather in a main room. She conducts. Nurse Amelia plays the piano.

Later that day, she remembers a tune she wrote last February. It was a song that came to her when she was ill, and thought she was on her way out.

“Don’t ever stop giving.
And don’t stop having fun.”

She adds, “Maybe you know someone who needs that song. If you do, you can give it to them.”

“The Buck Stops With The Parent”: Parents express concern with face-covering...