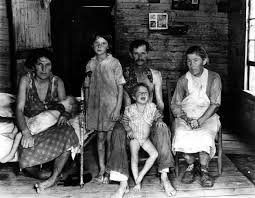 Alabama, 1963—it was chilly. It was gray. A skinny Christmas tree sat in the corner of his rundown home, undecorated. No gifts.

His wife was a secretary. He punched a clock, wore leather gloves, and moved steel for a living.

Theirs wasn’t a particularly unusual story. They worked from can to can’t. They sweat for dimes. They ate beans, rice, and white bread.

They had seven kids. Money was hard to hold on to with seven hungry tummies.

And, on the day she found him home from work early, sitting on the steps, she knew things were about to get worse.

His face was red and puffy. He couldn’t find the words. They’d fired him. His supervisor had delivered the news without warning.

“We’re gonna believe,” she told him.

The next day, he drove a dilapidated Ford through busy streets with the classifieds beneath his arm. His eldest son rode shotgun.

The boy watched through the windows while his father begged foremen for grunt work.

After three weeks of job hunting he had, in fact, lost weight. They say he wouldn’t eat suppers.

The once strong steelman; an unemployed shell, skipping lunches and dinners to save money. Rejection takes a toll.

He woke to a tree with a family seated around it. There were newspaper-wrapped packages beneath the branches. Each gift had the word, “Dad” written on it.

His eldest made a picture book from construction paper and cardboard.

His daughter had given him a cigar.

His youngest gave him five quarters which he’d saved in a piggy bank.

They say he cried. They say the family dogpiled him. They say that for supper, his wife prepared a steak just for him. The rest ate beans.

Before the meal, he stood to say a blessing, but he was too overcome. So, she spoke for him. His solid wife, a woman who reminded everyone to keep believing.

She stood and told her family to bow heads.

“Lord,” she said. “Help us not to worry. And if it’s not too much trouble, give us a sign that you’re still there.”

He offered to share cuts of steak with his children and wife. But they refused.

And it was after that very supper that one of the children pointed to the window and hollered, “LOOK! IT’S A SIGN!”

Only a few flakes, but soon the flakes turned to flurries. The flurries turned into piles. The piles turned into drifts. By New Year’s Eve, it was one of the largest snowstorms Alabama had ever known.

Still, after all these years the family hardly remembers the historic storm at all.

They only remember that their father found a job that same week. It was the same job he retired from at age seventy-one.

Don’t give up hope.