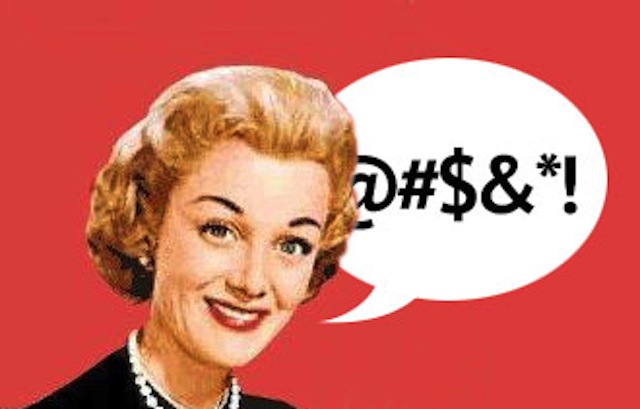 I will try to keep this clean.
Don’t want to offend the offendable.
Not worried about the others.
You know who you are.
Well guess what?
Not long ago an Associated Press-Ipsos survey revealed that nearly three-quarters of the people polled said that they encountered profanity in public from time–to-time.
The poll didn’t say how frequently time-to-time was, but profanity not precision was the point.
More than that, around two-thirds of those polled said that people swear more than people used to.
Which didn’t surprise me either, because people always say that things are worse today than they ever have been before, even when they aren’t.
And to carry it a bit further – as polls tend to do – around 64 percent of those asked said that they use the F-word from time-to-time.
And eight percent of ‘em said they use that word several times a day, qualifying them, I suppose, for some sort of “Frequent F- word-user Plan.”
Now folks, I will not deny that I am among those who believe that people swear more than they used to.
And I will confess that from time-to-time (whatever that means) I use words that I would not want my Mama to hear. (Mama has a pretty low threshold when it comes to this sort of thing. She once took a switch to me for saying “dern.”)
All of which would stand to reason because according to the poll more men than women admit to swearing and here I am a man admitting to it.
But who is responsible for all this?
How ‘bout Hollywood?
I recall how shocked I was the first time I heard “damn” on the silver screen. Probably the first many of you heard it, too. “Gone with the Wind” – Rhett Butler to Scarlett O’Hara. “Frankly my dear . . . .”
Popped me right up in my seat.
Today you hear that, and more, all the time in movies and on TV.
So I wasn’t surprised when the poll revealed that young folks, who have grown up with cussing movies and crude television, swear more than their elders.
Well, not all young folks. Young women swear less than young men.
Nor is cussing confined to the lower classes – the “trashy” as my Mama used to call them.
Remember how Vice President Dick Cheney used the F-word when he took exception to something a Democratic Senator said.
And I bet he said a few choice things that day in the duck blind when he gave his hunting buddy a face full of birdshot.
Bet his buddy came back in kind.
All of which is to say that according to polls, cussing is running amok across our land.
And other lands as well.
England, which has always been considered the epitome of linguistic good taste and verbal decorum, also has a profanity problem.
But the English are doing something about it.
Or at least the English in the town of Wellingborough.
Unable to stamp out swearing in the local school, the folks in charge of educating youngsters over there have decided to allow students to cuss in class.
Even cuss the teacher. Even use the F-word.
But only five times per class – the teacher will keep a tally on the board.
Which means that each class has to work together to control cussing. They have to confine it to essential epithets and not waste their allotment on off-handed swearing that serves no particular purpose – “oh damn, another bloody test” would cost them two of their five freebies.
Now I can see where Wellingborough folks are coming from.
Teach the little cussers collective action and group responsibility. Just the sort of thing you’d expect from a semi-socialist society.
And what does the class get if it exceeds the 5-cuss-word limit.
It gets “spoken to.”
Well, that ought to strike fear in their profane little hearts.
And for those classes that stay within their limit, the schools will send “praise postcards” to their parents.
Now friends, I have always been something of an Anglophile. I’ve been to England a couple of times and found the people delightful.
I am okay with warm beer, gin and tonic without ice, and meat pies made from parts of the animal even Southerners don’t eat.
So it saddens me to see this once great nation slide down the slope of permissiveness into a pool of profanity.
And though we may be sliding with them, at least we aren’t keeping a tally on the board.
At least not yet.
Harvey H. (“Hardy”) Jackson is Professor Emeritus of History at Jacksonville State University. He can be reached at hjackson@cableone.net.