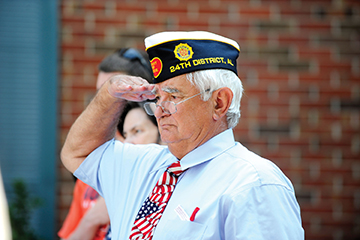 The City of Opelika conducted its annual Memorial Day service Monday morning outside of City Hall.

“This was the best Memorial Day service we’ve ever had,” said many in attendance.

After opening remarks by Opelika Mayor Gary Fuller, Chaplain Ken Allen of the American Legion led the invocation. His Men, a gospel quartet from Trinity United Methodist Church, then followed with a rendition of the “Star Spangled Banner.”

Burgess touched on many topics during his speech but started by recognizing the veterans in attendance. He then touched on the staggering number of veterans who have been either killed or wounded in action during our nation’s history.

“Today I was to spend some time reflecting on the stories of those service members who died for our nation’s cause, some in combat and some after a life, long lived in uniform. Their stories are the stories of this nation, and they deserve to be heard, remembered, and honored on Memorial Day and beyond,” Burgess said.

“America has never enslaved any with whom we have fought. There is no American empire. On the contrary,” he said. “Billions on the planet today and billons yet unborn live free because Americans fought and died. Once peace was achieved, we rebuilt what was there and we departed. That is the essence of what we are about as a nation.”

He noted the importance of stopping to talk to veterans wearing baseball caps displaying the names of wars from years past, to thank them for their service and to hear their stories.

“Today is the day to tell the stories of battlefields of decades past so that the soldiers of yesterday and today are never forgotten by the children of tomorrow,” he said.

The retired three-star general closed his remarks with one of his favorite verses from the Bible. “Then I heard the voice of the Lord saying, “Whom shall I send? And who will go for us?” And I said, “Here am I. Send me!” – Isaiah 6:8

“This is what the men and women do every day for this nation in answering that call. I think it captures very well the essence of military service,” he said.

After more music and a special presentation to the library and museum, the traditional laying of the wreath took place followed by the playing of taps.

Many in attendance wore red artificial poppies, a Memorial Day tradition. Due to the blood red color of the blossoms, the poppy came to be recognized as a symbol of fallen soldiers. The symbol was popularized by the famous poem “In Flanders Fields,” which was read by Chaplain Allen just prior to the benediction.