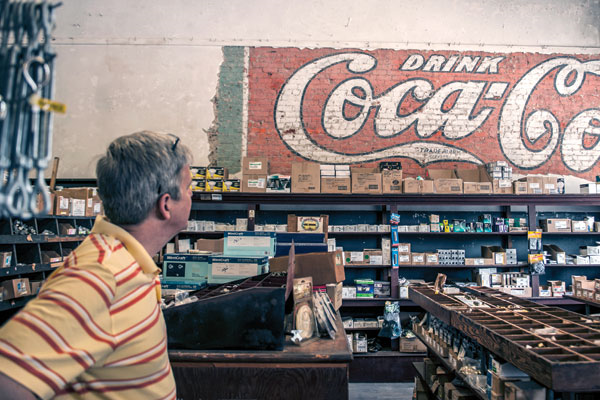 Photo by Robert Noles
Dozier SmithT gazes at the Coca-Cola mural he recently uncovered at Smith T Building Supply. The sign was painted in the early 1900s before later being covered by plaster. The Smith Ts are still in the process of removing the remainder of the plaster and said they hope to reveal a mural that spans the entire height of the wall.

When Dozier Smith T discovered a painted letter “a” and “5¢” upon removing a piece of wood paneling from a wall at Smith T Building Supply, he knew he had something special.

“We knew something was there. We started to just chisel away,” Smith T said. “I thought it was some sort of drink, but I didn’t know if it was RC Cola, Pepsi (or what) …  But then Cecil, who works here, said, ‘Oh yeah, that’s Coca-Cola – that’s the colors.’”

A half day of chiseling revealed a piece of Coca-Cola history – a large painted mural encouraging viewers to “Drink Coca-Cola” that had been painted onto the wall of the building adjacent to the hardware store at some point before the hardware store was built.

A shelving system laden with lightbulbs, outlet covers, cords and other lighting-related hardware blocks the SmithT’s access to the lower half of the wall, but SmithT said he has plans to move it so he can finish the job and reveal the rest of the mural – speculations abound about what could be next to that 5¢.

“There might not be anything underneath there, but I have to believe there is,” Smith T said. “(Ricky Dorris’) family has painted Coke signs for years, and he thinks maybe it would say ‘in bottles.’”

There’s another reason to finish pulling away the plaster, too – the completed picture just might be enough to draw a visit from officials with Coca-Cola in Atlanta, Ga., with whom Smith T has been in contact – particularly a man in the archives department.

“Looking at the shape and drawing, he says it’s 1930s or earlier,” said Smith T, but added, “It’s got to be a lot earlier than 1930s, in my opinion, just knowing the history of this building.”

The structure was built in 1910 according to tax records; it could have been built a few years before or after. Frederick’s Furniture occupied the building in the early 1900s before it became Canon Motor Company in 1916 or 1917. Smith T’s grandfather likely began to lease the building initially and purchased it in 1933 from the Renfro brothers.

Smith T said they used the adjacent building “for the longest time as a cement warehouse where we would have moldings and concrete.” When they acquired the building on the corner, they combined the two into a lumber warehouse.

These facts, Smith T said, have him convinced the painting is at least 110 years old – potentially making it one of the oldest original painted wall murals in the region.

“There’s no telling how many older buildings plastered over and have things like this on them,” Smith T said.

Smith T said anyone is welcome to come by and see the mural for themselves.