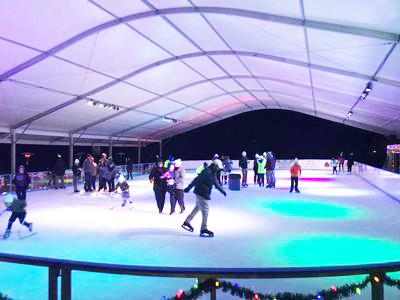 A not-so-common feature of an “Alabama Christmas” will return for a second time in the city of Auburn in early December, which promises to be bigger and better than before according to event organizers.
Auburn Mall will be the new site of the skating rink that opened last December in a parking lot on East Magnolia Avenue. Utilizing real ice instead of synthetic, the new rink can accommodate an estimated 150-200 skaters on a surface that has expanded by more than 4,000 sq. ft.
“We found that while the rink had a great reception last year, the sizing was a bit on the small size to accommodate the number of skaters we are hoping to draw. The capacity for last year’s rink was around 40 people at a given time,” said Whitney Morris, a special events coordinator with the City of Auburn.
Morris added that the rink is result of a collaboration among the City of Auburn, Auburn-Opelika Tourism Bureau and Opelika Chamber of Commerce, with support from the Auburn Mall / Hull Property Group and Alabama Power.
With plans to remain open through the holiday season until February, Morris said the hours of operation will vary from day to day based on holidays and area schools schedules, and will be published once technical details are finalized. Unlike last year, the rink will be open for portions of Christmas and New Year’s Day.
“I have many fond memories of going ice skating as a child, especially during the winter months, and to be able to work toward bringing that opportunity for children, families and residents in this area is very special and very rewarding. It’s a way for us to help residents create those wonderful holiday memories with their families and we couldn’t be more thrilled with the opportunity to do that,” Morris said.
The cost of admission will be $10 per skater.
For more information, call 334-501-2930 or visit www.auburnalabama.org/parks. The mall is located at 1627 Opelika Road.

Standing Up and Speaking Out: AU Students Are Ready for a Change