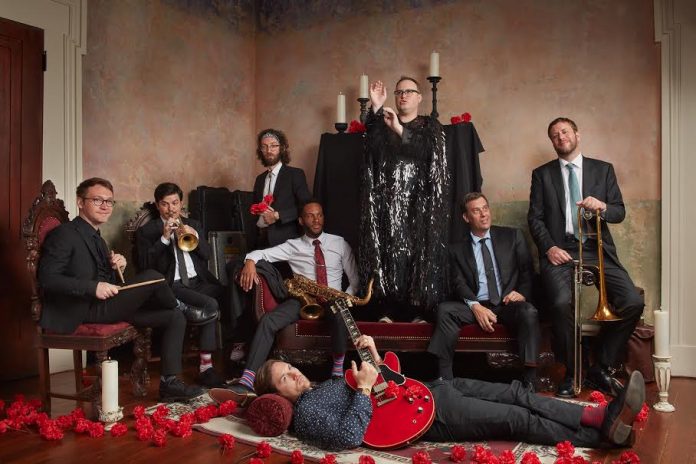 The Birmingham-based soul group “St. Paul and the Broken Bones” will serve as the headlining act for the third annual “concourse/south” event Aug. 25 in downtown Opelika.
Organized by Cottonseed Studios, the arts and music festival has been condensed to a one-night, family-friendly affair that will feature food and beverage from local establishments, live music, night market and more.
“Kids 12 and under will be able to come in for free … and this is an event geared towards everyone. It’ll be family oriented and just really, really fun,” said Cottonseed Studios owner Richard Patton.
Following is a breakdown of the band, full event schedule and ticketing information.
“Old school revivalists”
Formed in 2012, the now six-piece band consists of members Paul Janeway (vocals), Browan Lollar (guitar), Jesse Phillips (bass), Andrew Lee (drums), Al Gamble (keys) and Allen Branstetter (trumpet).
Influenced by gospel and soul singers like Joe Ligon, Al Green and Otis Redding, the band was described in a Paste Magazine review as “an outfit that seems to mine the very fiber of that classic soul sound. Theirs is music of celebration, of exhortation (and) the sound of pure pop.”
To date, the band has released four studio efforts, and is about to drop its fifth Sept. 7, a release titled “Young Sick Camellia.”
“… it’s an old-school, R&B, soul-and-groove experience you get when you see them live. It harkens back to those kind of bands from the 60s and 70s that put on those long shows that you wanted to dance through the whole time,” Patton said.
Evening festivities
The street between 7th and 8th Streets along 1st Avenue will be blocked off the night of the performance in order to maintain adequate parking and access to downtown merchants, according to Patton.
The market will open at 5 p.m. Organized by Abby Griffin of Griffin Goods, it will feature an “eclectic” array of offerings.
Show gates will open at 7 p.m., and a yet-to-be-named band will open for St. Paul and the Broken Bones at 8 p.m.
Janeway and company will take the stage at 9 p.m., and are expected to perform until 10:30 p.m.
Currently, Almost Anything, John Emerald Distilling Company, Mama Mocha’s Coffee Emporium, Red Clay Brewery and Resting Pulse Brewery are sponsors, but Patton said they are seeking additional sponsors and market vendors for the event.
Early bird tickets are sold out, but there are still general admission and VIP tickets available through eventbrite.com, for $40 and $100, respectively. VIP privileges include private, front-of-stage viewing and provision of food and drink.
For more information or to inquire about becoming a sponsor, visit concourse.live or www.cottonseedstudios.com. Interested vendors can RSVP through Griffin’s website, www.shopgriffgoods.com.