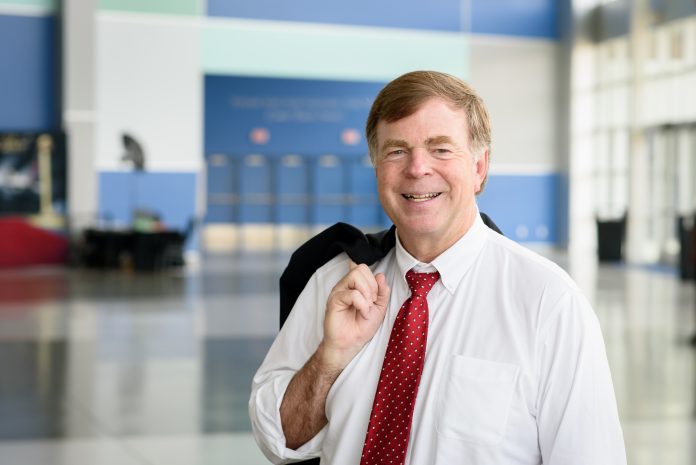 Former Huntsville mayor and Republican gubernatorial candidate Tommy Battle visited with Opelika Observer staff last Wednesday to discuss his ideas and offer solutions to statewide issues.
Following is a background on Battle and an overview of his core beliefs and values that will guide him as Alabama’s governor if elected.

A Birmingham native, Battle said he discovered his love for politics after overhearing a breakfast conversation with then-Mayor George Siebels and a group of concerned citizens.
“One morning, I was bussing tables (at one location of his father’s restaurant chain, Britling Cafeterias), and in one corner, there was a group of businessmen and former (Birmingham) Mayor Mr. George Siebels. I remember hearing them talk about how they could make Birmingham a better place and what they could do to improve the quality of life for everyone,” Battle said. “I looked over thought, ‘wow, that is really neat. They’re all coming together to do nothing but make their community a better place … and that has stuck with me ever since.”
After high school, Battle pursued a business degree at the University of Alabama. During his college years, he found his voice for politics on the school’s debate teams and as chairman of its “College Republicans” group.
Graduating in 1977, Battle’s first job after college was a manager for the “Britling on the Highlands” location.

In 1984, Battle dipped his toes in the political waters by running for Hunstville’s city council. Since relocating there four years ago, he said he decided to run for the position as a way to be involved and give back to his community.
“At the time I ran for council, I was 28 years old, too young and dumb, thinking I’d win … then I won. All of a sudden, we looked around and said, ‘alright, now what do we do?” Battle said. “And those four years served as a great learning experience. I was the head of the finance committee and learned a lot about how to run a city and help it grow.”
A failed bid for the mayorship of Huntsville in 1988 prompted Battle to step away from politics and start his own real estate business, a decision that he said laid the foundation for his current bid for governor.
“Those 20 years of being away from politics allowed me to raise my son and coach him in basketball, be involved and teach Bible study at my church. Sitting out for that length of time probably prepared me to be Huntsville’s mayor in 2008,” Battle said.”

Mayor of “The Rocket City”

Battle returned to politics in 2008, defeating 12-year Democratic incumbent Loretta Spencer.
During his 8-year stint as mayor, Battle cited tremendous economic growth, with Huntsville and the surrounding communities adding 24,000 jobs, $500 million worth of new roads and generating $4 billion in economic investments from companies like Polaris, Toyota, Mazda and more.
“Ten years ago when I became Huntsville’s mayor, my team and I put together a plan and strategy to improve the city. As a result, citizens saw the construction of new roads, improvements to education, additions to our infrastructure and a spike in economic growth,” Battle said.
Restoring state pride
With prayer and careful consideration, Battle said he announced his decision to run for governor last year with one major goal in mind – changing the public’s perception of Alabama.
“I want Alabama to be talked about as a ‘smart place,’ and change the conversation. Many people come here with the preconceived notions of the 60s and what we used to be, but we aren’t anymore,” Battle said. “We do some things, have some industries in this state that you can’t find anywhere else in the world. Many times, we sell ourselves short, and we got to stop doing that. We need to focus on the great things that are happening now here in Alabama.”
With a changed public perception, Battle said it will be easier to incentivize the growth and development of industries in Alabama.
Improving and providing quality education to Alabama’s children is another cause near and dear to Battle’s heart. His wife, Eula, has more than 31 years of experience in education. After retiring, she started working for the nonprofit “Free 2 Teach,” which provides teaching materials, supplies and equipments for Madison County’s three public-school systems and its 52,000-plus student population.
“My statement on education is this: ‘if I don’t get education right, then I don’t sleep at night.’ She (Eula) will make sure I get education right,” Battle said.
Following are some other issues that Battle hopes to address if elected governor:
• standing up for small businesses by preventing the passage of harmful tax hikes or bad legislation
• protecting 2nd Amendment gun rights for Alabama citizens as guaranteed in the U.S. Constitution
• allowing a public vote for a statewide lottery
• increasing funding from law enforcement agencies statewide.
For more information, www.tommybattle.com.