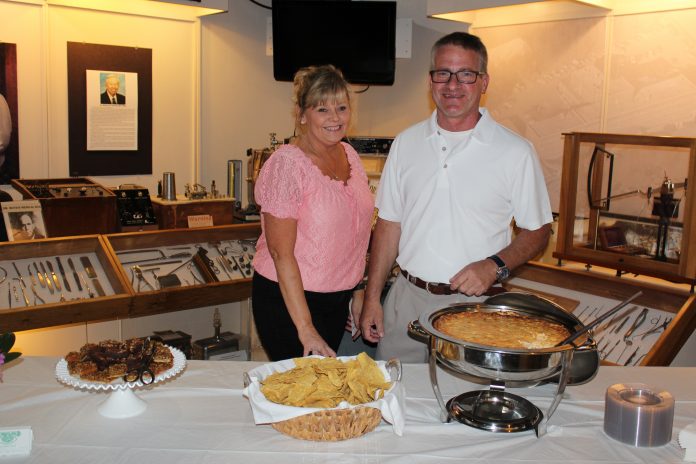 Caterer Jenni Steed is carrying on two legacies. One is the family love of catering with her grandmother and mother both in the business, and the other is Ursula’s Catering from her years of working with the owner. Her catering business operates The Café at the Jule Collins Smith Museum of Fine Art and The Café Too.

The history of Ursula’s Catering goes back to The Greenhouse restaurant, which opened in January 1978 in an older house at the corner of Second Avenue and Ninth Street in Opelika. Ursula Higgins worked with two ladies who helped with the day-to-day operation. Ursula handled the food, making menus and working with a chef.

The restaurant was elegant with white tablecloths. When they first opened, the menus were written in calligraphy on wicker fans. The lunch menu included chicken crepes, Ursula’s famous chicken salad, spinach salad with an Oriental dressing and a popular dessert of meringue shells filled with coffee ice cream and topped with chocolate sauce.

When a recession hit the Opelika area in 1991, business began to decline. The restaurant closed after 14 years. Many people in Opelika were saddened to see The Greenhouse close.

Ursula built a kitchen on the back of her house and began catering full time. She took over The Café at the Jule Collins Smith Museum of Fine Art in Auburn.

Jenni went to work with Ursula 18 years ago. When Ursula retired five years ago, she took over the business.

Jenni grew up in San Diego where her grandmother and mother were both caterers. Her grandmother, who never drove, was the in-house cook for the Elks’ Club and also catered weddings. When her mother started catering, she began by doing cocktail parties for Jenni’s father’s business, and it grew from there.

Her grandmother catered weddings at the Greek Orthodox Church in Orange County, Calif. Jenni, her mother and sisters would help the grandmother by peeling potatoes for three days, which the grandmother used for making her potato casserole. She served the casserole as an accompaniment to prime rib offered from carving stations.

Jennie and her sisters helped both their grandmother and mother with catering. “By the time I was 12 years old,” she says, “I knew how to pop a champagne cork better than anybody.”

While she enjoyed helping with the catering, she never thought of going into the business. After college, she worked at a bank. She met her husband, Doug, when he was in the military stationed in San Diego.

Since Doug is from Dadeville, they moved to this area 23 years ago after he was released from the service. Doug now helps with catering and prepares their special smoked salmon.

When they first moved here, Jenni went to work at AuburnBank. At the bank, one of her friend’s daughters worked for Ursula Higgins in her catering business as a server. She asked her mother and Jenni if they would help serve at a large wedding. Jenni said she would be glad to help.

That was 18 years ago. Jenni went to work with
Ursula in her catering business and handled the parties. Five years ago, Jenni purchased the business and looked for a kitchen. She found a small place, Café Too, and uses the kitchen for catering as well.

The menu is seasonal, and all the dishes are prepared fresh from scratch. While the sausage and chicken gumbo is popular during fall and winter, spring and summer soups feature fresh vegetables, including spring pea, asparagus soup, roasted red pepper and summer corn. Two chicken soups are offered as well, one with apples and curry.

Chicken salad and Ursula’s meringues with coffee ice cream and chocolate sauce are staples that stay on the menu year round.

Jenni’s niece, Allison Devenport, is her baker. When Allison visited Jenni with her mother at 8 years old, she announced she was coming back to attend Auburn University. She is now a senior at Auburn.

Allison has created several new desserts for catering. A couple of years ago, she entered a cookie contest at Auburn. She created a white chocolate shortbread key lime cookie and won the contest. Jenni plans to have her niece bake those cookies for Taste of the Town. She also created a pecan bar that tastes like pecan pie.

While Jenni has a list of items to select for catering, she creates custom menus to fit a client’s budget.

“I have a great staff,” says Jenni. Her cooks, Eloise Harvey and Doris Harris, both started with Ursula 20 years ago. Others are Lucy Berry and Reba O’Steen, and Eloise’s sister, Yvette Rowell, is helping.

“Ursula is like a mother to me,” says Jenni. “She has mentored me and she is an amazing woman. I can call her any time and ask her a question, and she will know the answer. I think she loves that the catering is continuing. It is Jenni’s Kitchen doing Ursula’s Catering.

“When I took over Ursula’s Catering,” says Jenni, “I thought of my mother and grandmother, who are both deceased. I know they are looking down happy because they both loved catering.”

Jenni is sharing a collection of her mother’s recipes that she used in catering, and others are from Ursula and The Greenhouse.

Jenni will be featured at the upcoming Taste of the Town along with 17 restaurants and catering businesses, two wineries and specialty coffees. The event is scheduled Tuesday, April 24, from 6 p.m. until 8 p.m. at the Museum of East Alabama on 9th Street in downtown Opelika. Tickets can be purchased at the museum or online at online at eastalabama.org.

Chicken Breasts in Sour Cream Sauce
Jenni Steed
8 slices dried beef (in a jar)
8 skinless boneless chicken breast halves (7 oz. each)
4 slices bacon, cut in half
1 cup sour cream
One 10 1/4-oz. can condensed cream of mushroom soup
2 cups sliced fresh mushrooms
Preheat oven to 300 degrees. Lay one piece of dried beef on each chicken breast and wrap with a half slice of bacon. Place in a 13 x 9 inch casserole dish, seam side down.
Mix sour cream, soup and mushrooms together. Pour over chicken breasts. Cover and bake for 1 1/2 hours. Serve with rice. Serves 6 to 8.

Garlic Green Beans
Ursula Higgins
1 lb. haricot verts (French green beans)
3 Tbsp. olive oil
6 garlic cloves, sliced
Salt, pepper
Cook beans in boiling salted water until almost done. Drain and rinse in cold water.
You may do this early in the day or the day before your party or right before you eat if you have time.
In a 12-inch nonstick frying pan, cook garlic in olive oil until light brown and then add beans. Cook only until heated through. Season with salt and pepper and serve.